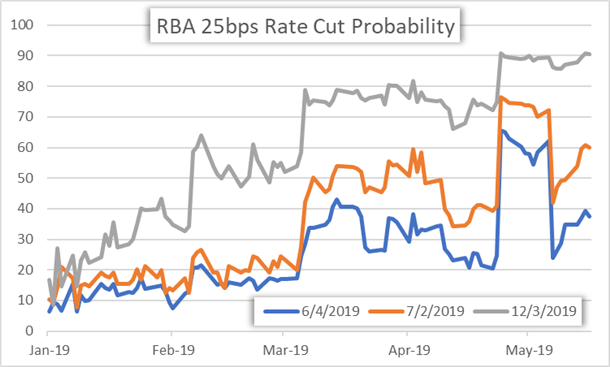 Since the last RBA meeting minutes were released, the odds that Australia’s central bank will lower its policy interest rate by 0.25 percent has climbed steadily. In fact, the probability that the RBA cuts its Overnight Cash Rate at its meeting on June 4 has jumped to 37.5 percent ahead of tomorrow’s job data.

With the RBA noting that a rate cut would likely be warranted if “inflation did not move any higher and unemployment trended up,” markets are now placing extra emphasis on Thursday’s job report due for release at 1:30 GMT. Bloomberg’s median consensus lists an expectation of 15K job additions with the unemployment rate holding steady at 5.0 percent. 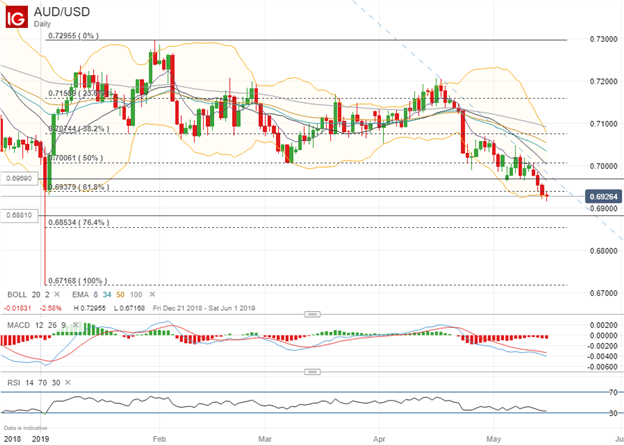 According to overnight implied volatility of 12.25 percent, currency traders might anticipate spot AUDUSD to trade between 0.6881 and 0.6969 with a 68 percent statistical probability. With spot prices beneath the 61.8 percent Fibonacci retracement level shown above and sharp bearish downtrend serving as near-side technical resistance, upside in AUDUSD could be limited.

Although, a stellar jobs report tomorrow could crush the market’s rate cut expectations and shoot AUDUSD towards the 0.7000 handle. Conversely, a disappointing reading on Australia’s labor market has potential to send the Aussie plunging towards the 76.4 Fibonacci retracement level.