AUD/USD remains little changed even though the NAB Business Confidence survey climbs to 7.3 from a reading of 0.1 in April, and the exchange rate may continue to consolidate over the coming days as the Trump administration keeps the door open to boost tariffs on China, Australia’s largest trading partner.

AUDUSD gives back the advance following the below-forecast Non-Farm Payrolls (NFP) report as U.S. President Donald Trump insists that tariffs on Chinese goods can go “much higher than 25%,” and the Australian dollar stands at risk of facing headwinds ahead of the Group of 20 (G20) Summit scheduled for later this month amid the weakening outlook the Asia/Pacific region.

In response, the Reserve Bank of Australia (RBA) may continue to endorse a dovish forward guidance at its next meeting on July 2, and the central bank may take additional steps to insulate the economy as “the downside risks stemming from the trade disputes have increased.”

It seems as though the RBA will implement another 25bp rate-cut in 2019 as the “latest set of forecasts were prepared on the assumption that the cash rate would follow the path implied by market pricing, which was for the cash rate to be around 1 per cent by the end of the year,” and Governor Philip Lowe and Co. appear to be on a preset course to push the official cash rate (OCR) to fresh record-lows as “the Australian economy is likely to have spare capacity for a while yet.”

With that said, AUDUSD may a more bearish fate over the near-term as the ongoing trade dispute between the US and China fuels speculation for another RBA rate-cut, but retail sentiment remains skewed despite the recent pickup in market volatility. 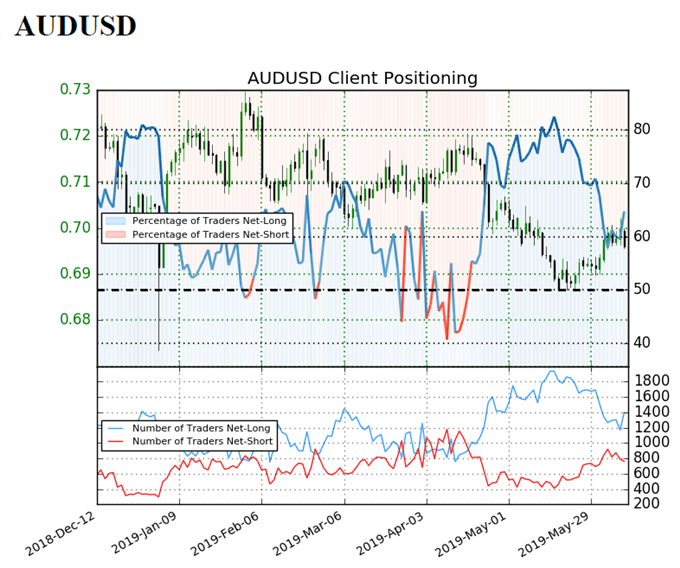 The IG Client Sentiment Report shows 64.7% of traders are now net-long AUD/USD compared to 58.4% last week, with the ratio of traders long to short at 1.84 to 1. Keep in mind, traders have been net-long since April 18 when AUDUSD traded near 0.7160 even though price has moved 2.9% lower since then.

The number of traders net-long is 19.1% higher than yesterday and 0.7% higher from last week, while the number of traders net-short is 8.0% lower than yesterday and 7.3% lower from last week. The recent decline in net-short position may account for profit-taking behavior as AUDUSD pulls back from the monthly-high (0.7022), but the tilt remains in the sentiment index, with the ongoing skew offerings a contrarian view as both price and the Relative Strength Index (RSI) continue to track the bearish trends carried over from late-2018. 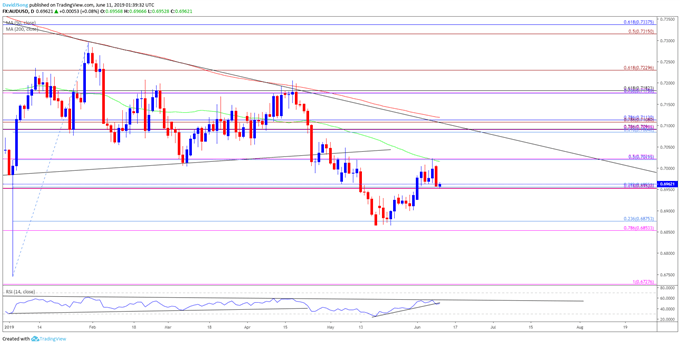