AUD/USD extends the advance from the May-low (0.6865) even though the Reserve Bank of Australia (RBA) cuts the official cash rate (OCR) to a fresh record-low, and recent price action raises the risk for a larger rebound as the exchange rate carves a series of higher highs and lows.

AUD/USD remains bid following Australia’s Gross Domestic Product (GDP) report as the economy expands 1.8% per annum during the first-quarter of 2019, and the updates may do little to sway the RBA as “the economic outlook remains reasonable, with the main downside risk being the international trade disputes.”

Comments following the 25bp rate cut suggest the RBA is in no rush to reestablish its monetary easing cycle as the “Australian economy is still expected to strengthen later this year,” and it seems as though the central bank will revert back to a wait-and-see approach at the next meeting on July 2 as Governor Philip Lowe insists that the “decision does not reflect a weaker outlook.”

It remains to be seen if the RBA will continue to alter the forward guidance for monetary policy as the U.S. and China, Australia’s largest trading partner, struggle to reach a trade deal, and the central bank may continue to insulate the economy over the coming months as Governor Lowe warns that the “latest set of forecasts were prepared on the assumption that the cash rate would follow the path implied by market pricing, which was for the cash rate to be around 1 per cent by the end of the year.”

Until then, AUDUSD stands at risk for a larger rebound as the RBA tames speculation for a series of rate cuts, but the pickup in volatility appears to be shaking up market participation, with retail sentiment narrowing from an extreme reading. 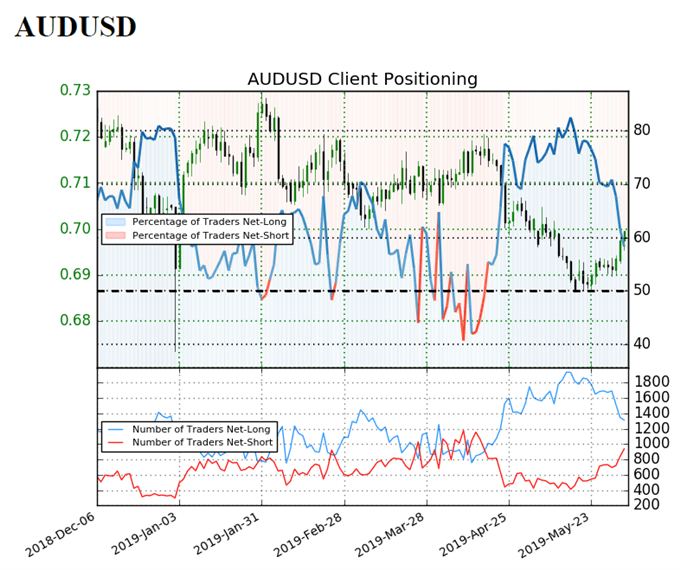 The tilt remains in the sentiment index, with the decline in net-long position pointing to profit-taking behavior, but the rise in net-short interest warns of a potential shift in retail sentiment amid the threat of a US China trade war. Nevertheless, recent price action in AUDUSD raises the risk for a larger rebound as the exchange rate breaks out of a narrow range and carves a series of higher highs and lows. 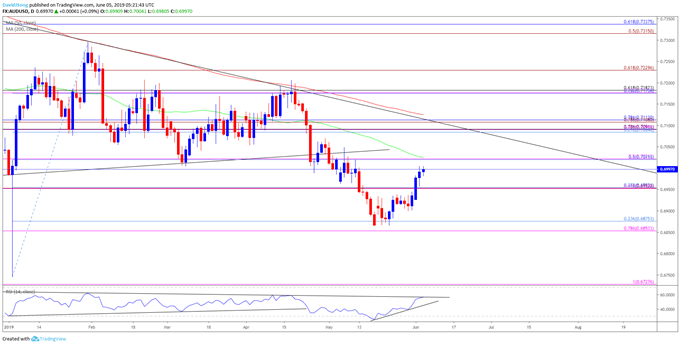