The Australian Dollar rose sharply but briefly on Tuesday as the Reserve Bank of Australia delivered an almost-universally expected rate cut but declined to be quite as dovish about the future as the market clearly expected.

The quarter–point reduction takes the RBA’s key Official Cash Rate to a new record low of 1.25%, from the 1.50% rate which had prevailed unchanged since August 2016.

However, the central bank’s accompanying statement noted ‘reasonable’ prospects for the global economy, despite trade tensions. Rate setters are also sticking to their view that ongoing strength in Australian employment will continue to eat into spare economic capacity and eventually push up stubbornly low inflation.

This may seem rather less likely to keen Australian market watchers. Still, the fact that the RBA chose to highlight it again probably puts the central bank in the position of being less accommodative than the market would have it be.

Moreover, the RBA continues to expect growth of 2.75% in 2019 and 2019. Note that this also might be seen as optimistic given that first-quarter expansion is expected at only 1.8%. Those data are due on Wednesday.

According to the rate indicator from index provider ASX, the probability of this move had been judged to be 100% by the market since May 27. Rate futures markets also fully price another, similar move by October this year.

AUDUSD rose quite briskly on the policy call and, indeed, given market settings the RBA would probably have had to be extraordinarily explicit about future rate cuts for there to have been any other outcome. Gains don’t look set to last though, and indeed began to fade within minutes of the release. 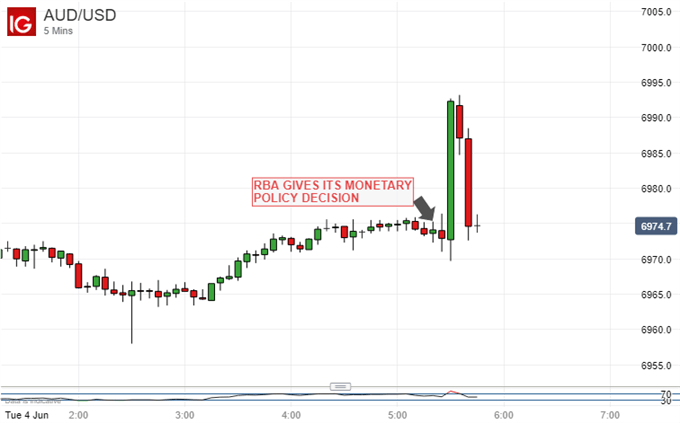 On its more meaningful daily chart the Australian Dollar remains close to its lows for the year and well within the downtrend channel which has been in play since early 2018. AUDUSD fell consistently last year as US interest rates rose, burnishing the US Dollar’s allure. To be sure, the market is now more cautious about the path of US rates but, unfortunately for Aussie bulls, it’s now more certain that there will be lower-still rates ahead in Australia, even after this latest cut.

Monetary policy aside the currency faces global headwinds from trade tensions. In broad terms the Australian Dollar tends to be quite sensitive to overall world growth prospects which have taken a hit as the hoped-for deal between Washington and Beijing has remained elusive.

More specifically Australia has huge export links with China and relies on the US for much of its security posture, so the Australian Dollar is arguably as exposed to huge fallout from a deterioration in Sino US relations. 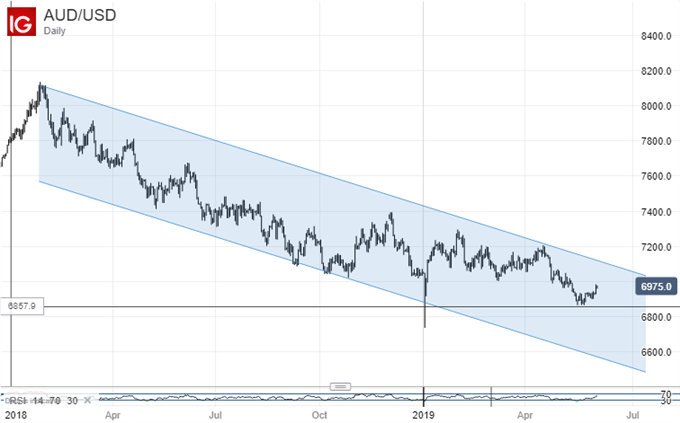 Clearly then the Aussie is struggling with a huge number of negative factors and it is rather difficult to see it heading anywhere other than lower as we go into this year’s third quarter.