A beleaguered NZDUSD pair could be a sign of things to come for the Australian Dollar if the Reserve Bank of Australia announces a monetary policy outlook similar to that of the Reserve Bank of New Zealand. Last week’s RBNZ rate announcement saw the bank stand firm on their current 1.75% official cash rate but issue a warning that the next move will likely be lower. Subsequently, the New Zealand Dollar faltered against its counterparts and the corresponding equity market – the New Zealand Stock Exchange (NZX) – traded higher.

As with many other central banks, the RBNZ highlighted slowing global growth in their rate decision announcement. In particular, officials noted potential for a deeper slowdown in some regional trading partners like China and Australia. Further, the US – China trade war remains an uncertainty for the region.

At the RBA’s previous policy meeting, officials suggested that no hike should be expected at the meeting on April 2. All things considered, a strong case for continued accommodative policy can be made. Such a case could lead RBA officials to follow in the footsteps of their New Zealand counterpart and conduct a dovish about-face. 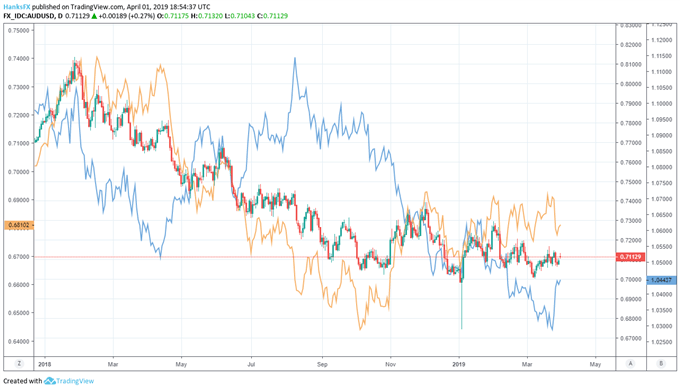 AUDUSD overlaid with NZDUSD in orange and AUDNZD in red

With a noteworthy correlation between AUDUSD and NZDUSD, traders may have been given a taste of what such a dovish outcome would mean for the Australian Dollar in the current landscape. The RBNZ’s announcement pressured NZDUSD considerably as the pair traded nearly 1.45% lower after the decision. 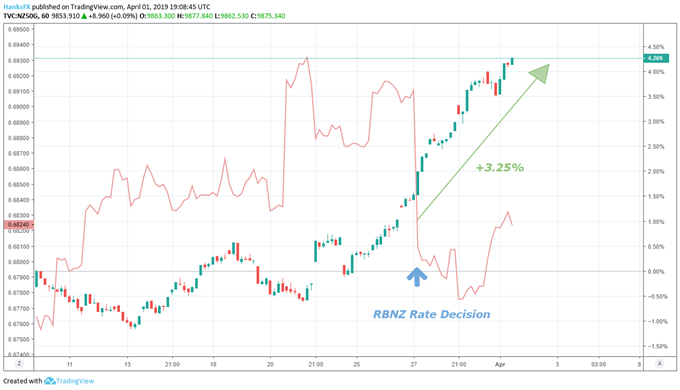 On the other hand, the New Zealand stock exchange gapped higher on the announcement and climbed considerably in the following days. The ASX 200 could be destined for a similar reaction as investors weigh the benefits of cheaper borrowing on businesses and a weaker currency brightens the outlook for exports. 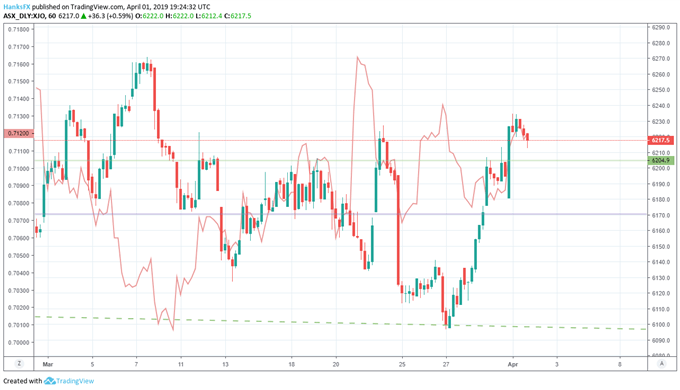 With that said, the index has multiple noteworthy price levels going into the meeting. On the lower side, 6,205 chould offer some support as it has provided minor resistance in the past. Slightly lower is the 78.6 Fib level at 6,170 which has contributed to indecision in prior sessions.

To the topside, 6,265 looks to be an area of important resistance – the highest the index has traded in seven months. A concerted effort higher could help the index break its recent range between 6,100 and 6,265. For further equity insight, follow Peter Hanks on Twitter @PeterHanksFX.