Financial markets were in an uneasy mood in Asia Pacific trade. Despite a handful of bright spots across regional bourses, a broadly defensive tone prevailed. The anti-risk Japanese Yen continued to march higher, but the sentiment-geared Australian and New Zealand Dollars managed some corrective gains following yesterday’s outsized losses.

Looking ahead, a revised set of fourth-quarter US GDP figures is expected to see growth downgraded to 2.3 percent from a prior estimate of 2.6 percent. A disappointment echoing the recent tendency for outcomes to undershoot baseline forecasts may compound global slowdown fears, urging the Yen higher still and putting cycle-sensitive commodity currencies back on the defensive.

Soundbites from Beijing, where a delegation of officials from Washington DC has arrived for the next round of US-China trade talks, are something of a wildcard. Signaling has been mixed from the two camps recently, leaving the markets without a clear sense of where the conversation stands. Promises of progress may be uplifting in the near term but such moves have failed to follow through of late.

Meanwhile, politics continue to weigh on British Pound as Parliament and the government battle for control of Brexit. Lawmakers rejected all of the alternatives presented to them in indicative votes yesterday. Prime Minister May is reportedly aiming for another poll on her plan Friday, but Speaker John Bercow insists it must be meaningfully different from previously defeated versions. Headline risk is understandably elevated. 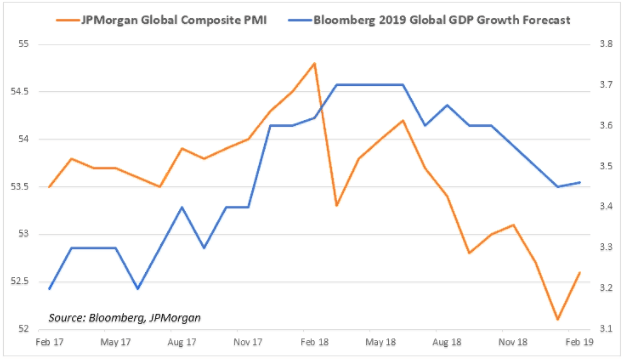 The chart above helps reveal the underlying economic forces behind the recent risk-off turn in financial markets and tellingly illustrates the sequencing of events. JPMorgan Global PMI, a timely proxy for the worldwide growth, peaks and begins to trend lower in February 2018.

There was a lag between this and when economists recognized the shift. Bloomberg data tracking the median forecast for 2019 global GDP growth sees downside revisions begin only five months later, in July. Financial markets were slower still, with the S&P 500 index (not shown) peaking in September.

Shares plunged through late December but have since turned sharply higher, erasing nearly 90 percent of the drop. The trend in underlying growth dynamics remains downbeat however, echoing technical evidence warning that – despite its blistering pace – the first quarter’s market swell has been corrective.