The Australian Dollar fell sharply Wednesday on news that domestic consumer confidence had done the same this month.

The March index from major lender Westpac fell by 4.9% on the month, more than wiping out the previous month’s 4.3% rise. March saw the heaviest fall for the series since September, 2017.

AUD/USD had been creeping lower before the release, but the fall unsurprisingly picked up speed after. 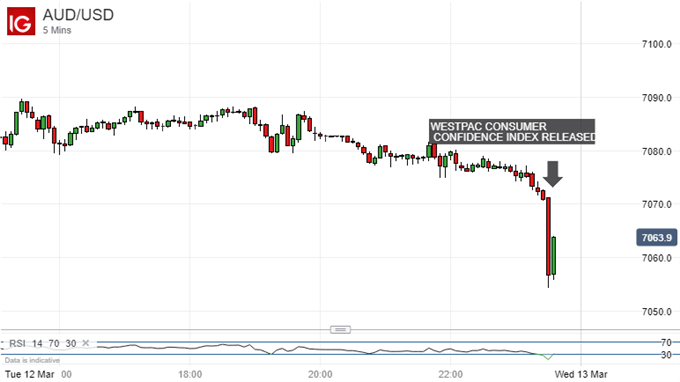 Remember these data come just a day after a weak business sentiment snapshot from Australia and suggest that economic conditions remain tough this quarter, following disappointing overall growth in the last three months of 2018. To be sure things aren’t all bad for Australia. Job creation remains very strong. However, inflation remains stubbornly low and, while it does, the Australian Dollar will conspicuously lack interest rate support and remain vulnerable to numbers such as Westpac’s which suggest any ‘demand-push’ inflation effect will be feeble at best.

Indeed, futures markets suggest that the record-low, 1.50% Official Cash Rate will probably fall further in the months ahead.

On its broader, daily chart the Aussie remains stuck in the downtrend which took hold last year as US interest rates rose while Australia’s stayed put. 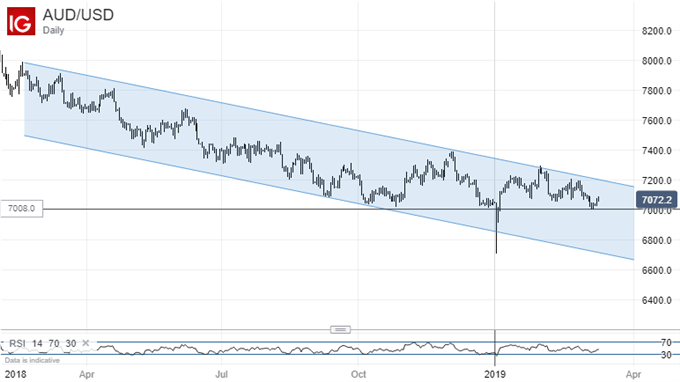 That weakness has endured into 2019, even as markets have priced in more rate-rise caution from the Federal Reserve , on that thesis that Australian monetary policy could yet loosen.

It is obviously hard to get very bullish about the currency’s prospects given all of the above, but any sign of a durable trade settlement between China and the US could see growth-sensitive assets receive a general boost. The Australian Dollar is clearly in this group and a deal must now be regarded as the main risk to what will otherwise be quite a bearish landscape for the currency.

Australia has arguably as much skin in the trade game as any third country given its strong trade and political links with both Beijing and Washington.