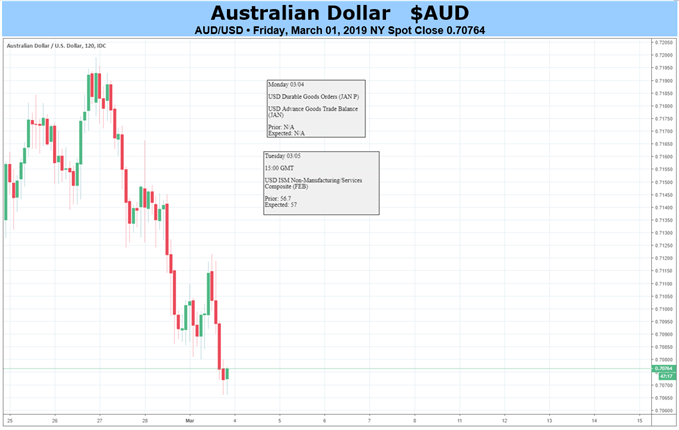 The Australian Dollar market can look forward to a hectic week of domestic economic events, but the effect of these on the currency may be less marked than their obvious importance might suggest at first look. That in turn could leave the Aussie biased lower.

Front and center will be the Reserve Bank of Australia’s interest rate decision, which is coming up on Tuesday. The Official Cash Rate has been stuck at its record low of 1.5% since August 2016 and the markets don’t think it’s going anywhere this month. Indeed, rate futures markets put the chance of any change at only 2%. This will leave market focus on anything the RBA may want to say but, given that its recent commentary has only served to weaken the currency, there’s unlikely to be much in this for Aussie bulls.

The RBA changed its tune a little last month. Where it had said that the next interest rate move was likely to be a rise, it admitted that further falls were possible given the uncertain global growth outlook. This change of language hit the currency even though the markets had been pricing in lower rates since late last year.

Governor Philip Lowe is due to speak the next day, in advance of the release of official growth numbers for the final quarter of 2018. If he once again plays up the advantages of a weaker currency, perhaps as one means of dealing with stubbornly low inflation, AUD/USD could struggle for gains.

As for the GDP numbers themselves, they may already be somewhat historic given that the RBA has downgraded considerably its own forecasts for this year’s growth. It now sees annualized expansion until end-June at 2.5%, when before it had looked to 3.25%. Given such downgrades the position at the end of 2018 may well be taken as very old news.

The Australian Dollar heads into a new week on the defensive. Admittedly this is largely due to the ‘USD’ side of AUD/USD as stronger US growth data have given the greenback a global fillip. The Australian Dollar may very well fightback, especially if overall risk appetite gets some hopeful headlines from US/China trade talks.

However, without these the Aussie could struggle for traction and it’s a bearish call this week. 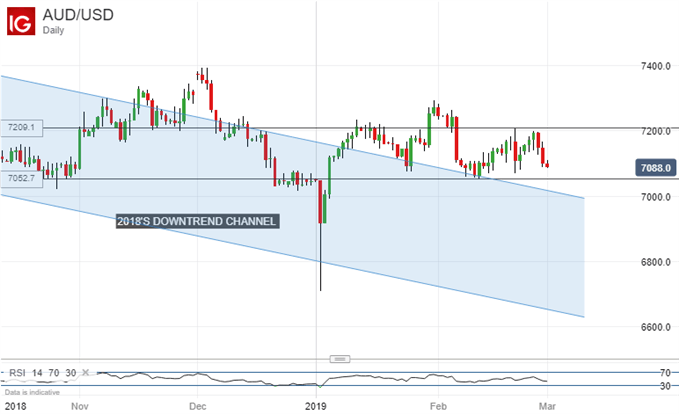