The Australian Dollar endured some divergent economic indicators last week but in the coming sessions is likely to focus on only one domestic marker- inflation.

It seems slightly incredible that we should in April still be waiting for this year’s first official Consumer Price Index print from the country. However, thanks to the Australian Bureau of Statistic’s quirk of releasing data quarterly rather than monthly data, we are.

That wait ends at last on Wednesday.

The final quarter of 2018 found inflation rising at an annualized 1.8%. That meant it was well below the Reserve Bank of Australia’s 2-3% target band. Indeed, that band has been elusive since 2014 and has remained so latterly even with interest rates at their current, record lows. The Official Cash Rate is 1.50%, as it has been since August 2016. The RBA has fretted inflation’s weakness for much of this year, and an uptick seems unlikely this time around.

Wednesday’s number is unlikely to break the degree of stasis currently besetting the Australian Dollar and keeping it range bound against its US cousin. Put simply resilient global risk appetite, with a hopeful eye on a US/China trade deal, is pulling the Aussie up, while the gravity of an utter lack of domestic monetary policy support drags it down.

So far, those forces have found an equilibrium point above last year’s pervasive downtrend. This week probably won’t see that equilibrium damaged, unless inflation provides a big shock either way. A strong print, coupled with last week’s very punchy employment numbers could even see current rate-cut forecasts repriced upward a little. Conversely more weakness could see that AUD/USD downtrend back in play.

On the basis that the latter is probably more likely, it’s a bearish call this week. 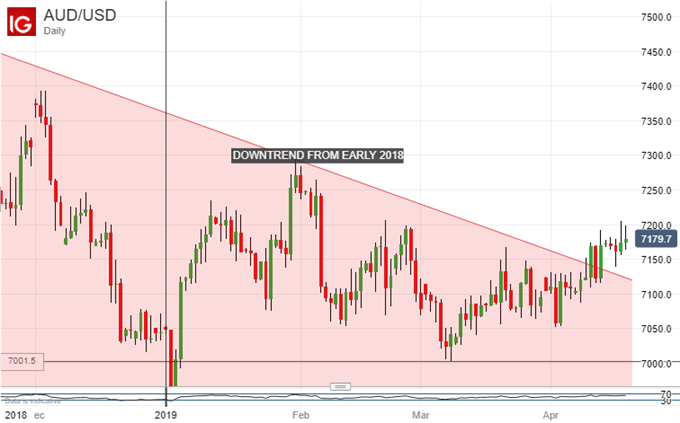 Whether you are new to trading or an old hand DailyFX has plenty of resources to help you. There is our trading sentiment indicator which shows you live how IG clients are positioned right now. We also hold educational and analytical webinars and offer trading guides, with one specifically aimed at those new to foreign exchange markets. There’s also a Bitcoin guide. Be sure to make the most of them all. They were written by our seasoned trading experts and they are all free.