The Australian Dollar gained sharply Thursday on news that the unemployment rate had fallen below 5% in February.

This is a feat not achieved by the Australian economy since 2011, since when 5% has looked like something of a natural floor. News that it isn’t after all boosted the currency despite news of sharply weaker job creation during the same month.

Overall this is a rather mixed bag of data, but it comes after a very strong previous month and it’s too soon to say that anything is terribly wrong with Australia’s long-formidable job-creation machine. Still, AUD/USD investors obviously clung to that employment rate fall. 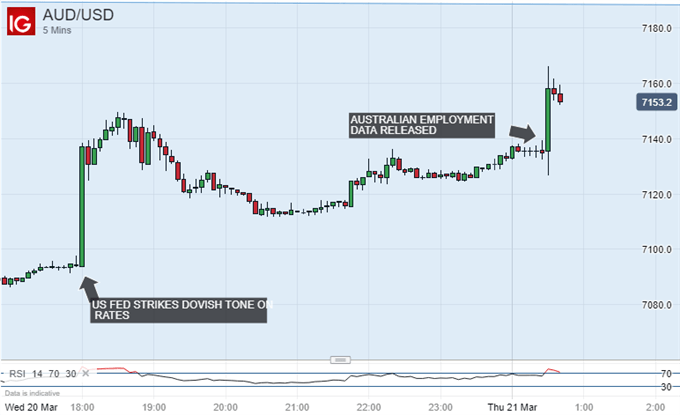 On its daily chart, AUD/USD remains well within the long downtrend seen since the start of last year, as Australian interest rates remained stuck at record lows while the US Federal Reserve continued to raise its own. 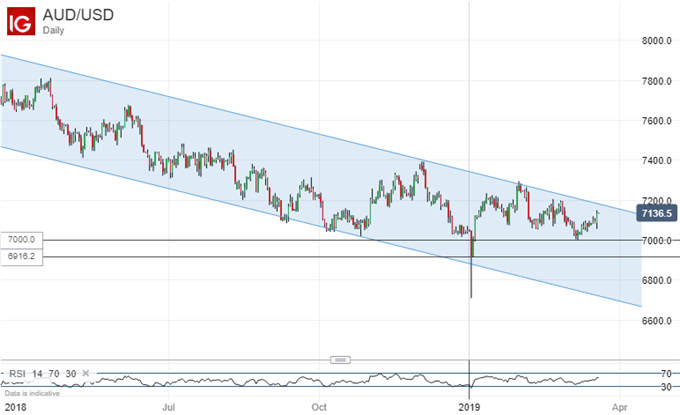 However, now of course the Fed itself is far more cautious, with Wednesday’s policy statement suggesting that only one more rate rise could come before the end of 2020. This prognosis has lifted many currencies against the US Dollar, and the Aussie is no exception.

The Australian currency could also benefit strongly in the event of a trade settlement between the US and China. However, the Australian economy endures resolutely weak inflation, and domestic interest rates may yet head lower, as the Reserve Bank of Australia has recently admitted. Given that it’s hard to see a conclusive, long-term downtrend break even if general US Dollar weakness pushes AUD/USD higher in the short term.