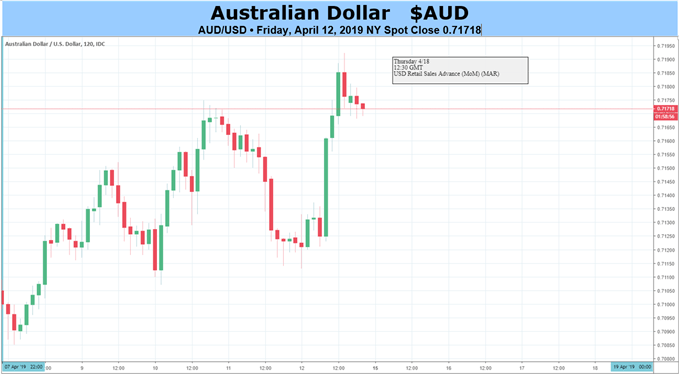 Looking for a technical perspective on AUD? Check out the Weekly AUD Technical Forecast.

The Australian Dollar spent most of its time aiming narrowly higher against its US counterpart this past week. Initially, the currency found support as RBA Deputy Governor Guy Debelle disappointed dovish expectations by hinting that the central bank is still in a wait-and-see mode for interest rates. Then, a lot of prior gains were trimmed as the US Dollar soared with local government bond yields.

Ahead, AUD/USD has plenty of developments to watch that may fuel volatility. One of these is the release of the minutes from April’s RBA monetary policy meeting. The central bank has not favored an easing bias unlike the Reserve Bank of New Zealand. But, the minutes may reveal more of what the RBA is closely watching after it hinted that it is keeping an eye on risks.

In the central bank’s Financial Stability Review released last week, the RBA mentioned that risks of a broad-based decline in global asset prices remains elevated. AUD/USD fell alongside Australian government bond yields as policymakers also fretted about a weaker global growth outlook. Should the minutes echo a similar tone, we may see weakness from the Aussie Dollar.

On the flip side, domestic economic data has been tending to outperform recently, according to the Citi Surprise Index. A similar outcome in the upcoming jobs report may cool RBA rate cut bets. Overnight index swaps are pricing in about a 70% chance of one by the end of this year. Traders will also keep a close eye on first quarter Chinese GDP data, which may also surprise higher as recent outcomes have tended to do of late.

After all, China is Australia’s largest trading partner which can often imply knock-on impacts for the latter and thus influencing local monetary policy. Speaking of trade, Japan’s Economy Minister Toshimitsu Motegi is going to the US for a round of talks. Lately, President Donald Trump has increased fears of an EU-US trade war to follow the on-going clash with Beijing.

If Japan were to be pulled into a similar dispute and equities take a turn lower, the sentiment-linked Australian Dollar could follow suit. There is also the risk of softer outlooks in the early phases of US first quarter earnings given slowing global growth. The week ahead contains those from major banks such as Goldman Sachs. Taking this into account, the risks seem to be against the Australian Dollar’s favor.