April’s Purchasing Managers Index from media group Caixin came in at 54.5, ahead of the 54.2 expected. In the logic of PMIs any reading above 50 signifies expansion for the sector under scrutiny. The service sector seems to be expanding quite robustly, in contrast to manufacturing where PMIs for the same month have underperformed expectations. The Caixin Composite reading, which combines the two, came in at 52.7.

All up the data suggest that China’s economy remains split, with a more lackluster showing for global trade still weighing on its formidable manufacturing export machine.

The Australian Dollar can act as the markets’ favorite liquid China bet but doesn’t seem to have done so to any great extent following these data. AUD/USD was already on the defensive thanks to news that the White House is threatening new tariffs on China in apparent frustration with the slow pace of trade talks. China has in turn reportedly considered delaying the next round of negotiations which were scheduled to take place in Washington this week. Growth-sensitive markets such as the Australian Dollar are also focused on the Middle East. The US has also upped pressure on Iran by sending a carrier strike group and bomber force to the Persian Gulf.

Australia’s central bank will set monetary policy on Tuesday with the chance of an interest rate cut held to be the highest it has been for more than two years. However, according to data compiled by index provider ASX, the chance has wilted significantly from more than 60% last week to under 40% now.

On its broader, daily chart, AUD/USD remains well within the downtrend which has endured since early 2018. 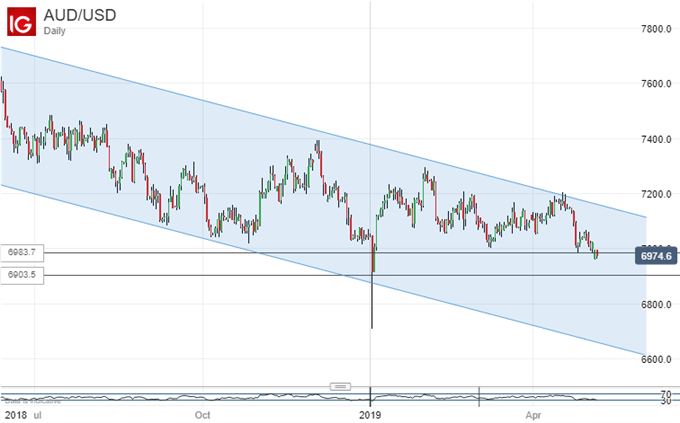 Australian inflation remains stubbornly weak despite record-low interest rates and the Reserve Bank of Australia could certainly justify cutting those rates further this week. However, the global economic situation remains fluid, with that US/China trade deal still very much in the balance and the markets focused on US interest rates as the US economy seems to be picking up speed.

The RBA may judge that it could get more bang for its rate-cut buck by holding action over until later in the year.