Find out what retail foreign exchange traders make of the Australian Dollar’s prospects right now at the DailyFX Sentiment Page.

The Australian Dollar took a hit Thursday despite expectation beating headline jobs growth. Devils lurked in the detail as the overall unemployment rate ticked up and full-time job creation fell.

The Aussie economy created 28,400 new jobs in April overall, well above the 15,000 markets were looking for. However full-time employment dropped by 6,300 even as 34,700 part time roles were filled. The unemployment rate rose to 5.2%, from 5%. A steady rate had been predicted.

Of course. official employment stats are always a key indicator for any country’s currency. The whole financial world comes to a halt before US payrolls numbers are released. Moreover, as one of the few unarguable bright spots in the Australian data patchwork, these numbers have offered the Australian Dollar support for years as employment has reached record levels.

However, this set is especially in focus for markets because, when it left interest rates alone this month, the Reserve Bank of Australia was perhaps unusually explicit in linking job-market developments to its monetary-policy thinking.

The RBA seems to contend that ongoing strength in the employment market will at last prove inflationary for the economy. There’s little sign of that in the inflation figures so far, though, and Australian rate futures markets seem pretty sure that the record-low 1.50% Official Cash Rate will go at least one and possibly two quarter points lower in the next eighteen months.

The Australian Dollar certainly lost ground after the numbers, even though they were by no means entirely gloomy. 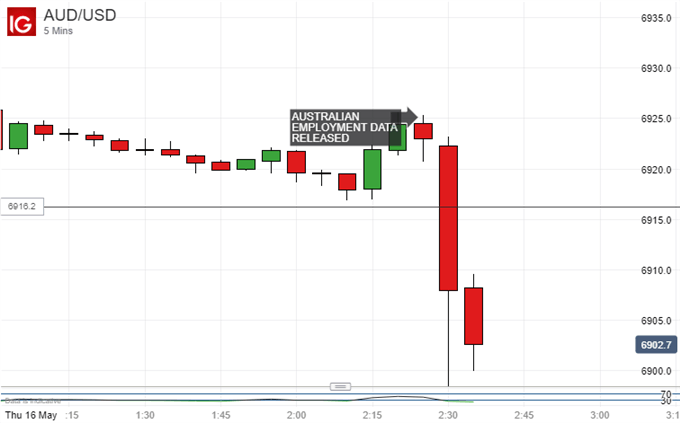 However, markets seem to be taking the RBA at its word, which is unsurprising.

The Australian Dollar is under all sorts of pressure on its broad, daily chart. The seemingly endless US-China trade spat is weighing especially on it, as it’s a currency sensitive to global growth prospects in general and of a country heavily exposed to both the US and Chinese economies. 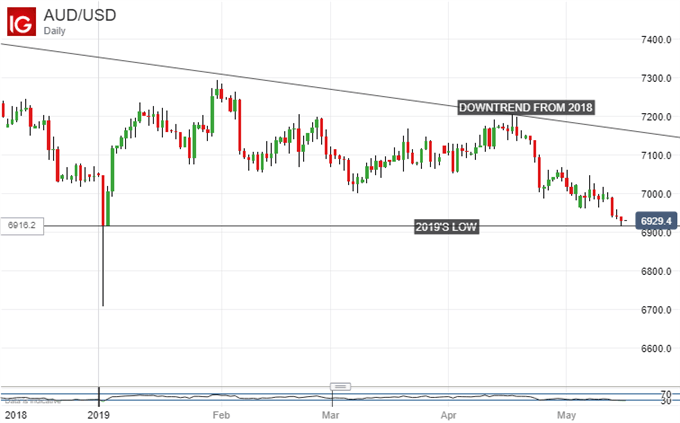 Domestically then there’s that weak inflation picture and the broad lack of monetary policy support. All of the above has seen AUD/USD move even further below the downtrend line which characterized trade for much of 2018. So far recent falls have only taken it back close to the lows of January this year, but it’s very hard to spot reasons why this pair should not slide below those soon.