The Australian Dollar weakened on Wednesday despite Chinese inflation data coming in as the market had expected.

May’s Consumer Price Index rose by 2.7% on the year. That was exactly in-line with forecasts, but it was also the highest print since February 2018. Higher Chinese inflation can have an impact on the Australian Dollar via the channel of its position as the foreign exchange markets’ favorite liquid China proxy. Higher prices could force Beijing to cut back on monetary stimulus, weakening growth and demand.

Food prices were up by 7.7% boosted by higher costs of Chinese staple pork as swine fever continues to hit domestic pig herds. Non-food CPI however was a much more subdued 1.6%

Factory gate prices also rose as expected, with prices up by 0.6% on the year.

AUD/USD slipped nonetheless, although it had already been weakening into the data release. 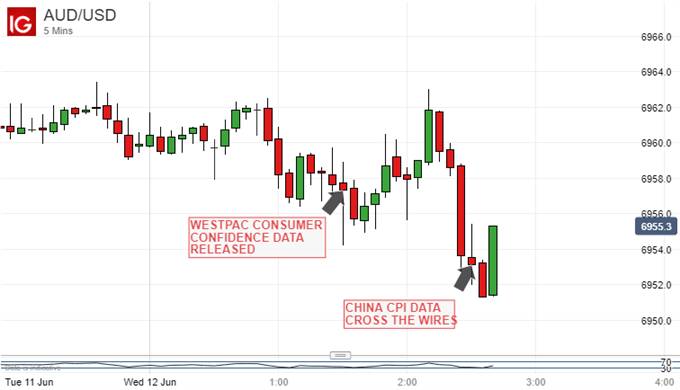 The currency had endured some weak domestic data released an hour earlier. June’s consumer confidence index from major lender Westpac came in well under expectations. It slid by 0.6% from May to 100.7. The base line for this index is 100 so the latest reading means that optimist respondents only outnumber pessimists by a whisker.

On its daily chart AUD/USD remains firmly within the long downtrend channel which has been in place since early 2018. The Aussie weakened steadily as US interest rates rose while Australia’s remained stuck at record lows. More recently the currency has benefitted from an improvement in global risk appetite and expectations that US interest rates could indeed start to fall.

Still, the Reserve Bank of Australia made a rate cut of its own this month, with at least one more expected very shortly.

The Australian Dollar still clearly lacks monetary policy support of its own and, while this is the case, it seems unlikely that that downtrend can be shaken off. 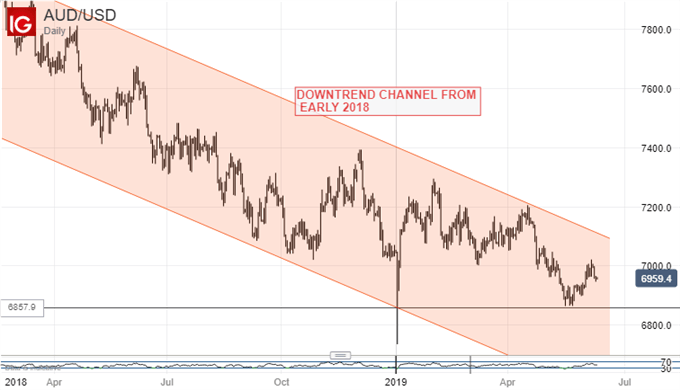 The next hurdle for Australia watchers will be Thursday’s official employment statistics. The RBA has made it plain that this bright spot in the economy is strongly linked to its interest rate thinking.