Have a question about what’s in store for Australian Dollar next week? Join aTrading Q&A Webinarto ask it live!

The Australian Dollar disregarded bullish technical reversal warnings that greeted it when it found itself sitting at critical support last week. AUD/USD ended up breaking out under 0.6982, achieving its weakest closes seen this year thus far. Zooming out, the Aussie has essentially resumed the dominant downtrend that ensued back in January 2018.

Now, there is the potential that AUD/USD may in the medium-term find itself testing lows not seen since March 2009 at 0.6744. This past week, it took out August 2015 lows at 0.69. It finds itself facing January 2016 lows next at 0.6827. Meanwhile, a near-term falling resistance line from April (pink line below) is guiding it lower. 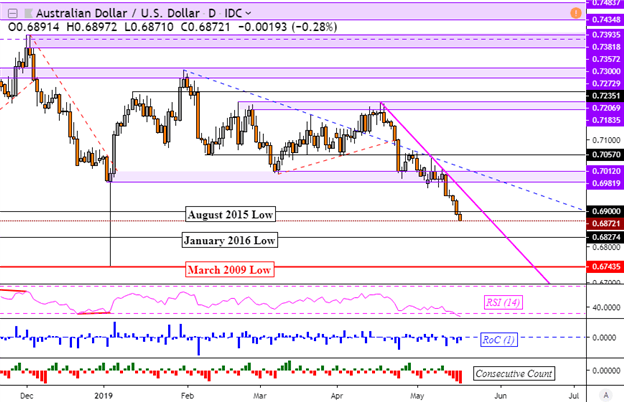 Weakness in the Australian Dollar was seen across the board last week and AUD/CAD was no exception. The pair went on its worst consecutive losing streak, 8 days, since September 2012. This falls in line with one of my top trading opportunities for this year, bearish AUD/CAD, NZD/CAD and EUR/CAD.

After the pair cleared 2016 lows at 0.9327, which also aligned with February lows, the pair accelerated its downtrend from the middle of April. It is now facing lows seen in 2013 and 2015 between 0.9151 and 0.9183 which may come up as support ahead. In the event of a turn higher, keep an eye on the two near-term falling trend lines guiding it lower on the chart below. 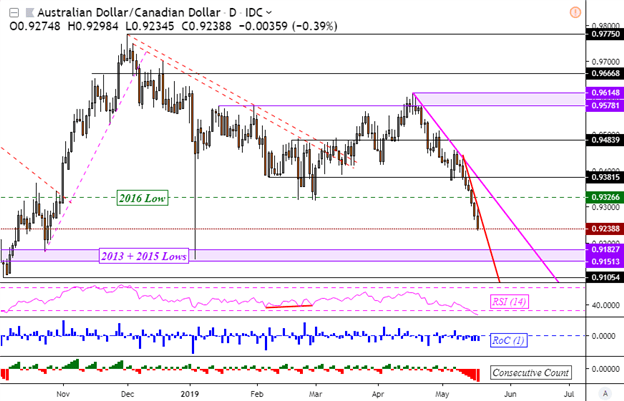 EUR/AUD meanwhile accelerated its near-term uptrend after bouncing on the rising trend line from February 2017, which ended up being a key turning point as anticipated. The initiation of the uptrend since then was also accompanied with a bullish Morning Star candlestick pattern. Since then, the pair seems to be confining within a rising channel on the next chart below.

Last week, the pair cleared the psychological barrier between 1.6057 and 1.6122. This has opened the door to testing the next area of resistance between 1.6276 and 1.6354. This may prove tough however, as in the past, EUR/AUD was unable to clear this are on numerous occasions in 2018 and earlier this year.

With that in mind, the pronounced weakness in the Australian Dollar comes amidst the risk of heightened volatility on US-China trade wars. For more updates on the Aussie Dollar, you can follow me on twitter here @ddubrovskyFX where I will also be watching out for those prominent fundamental developments. 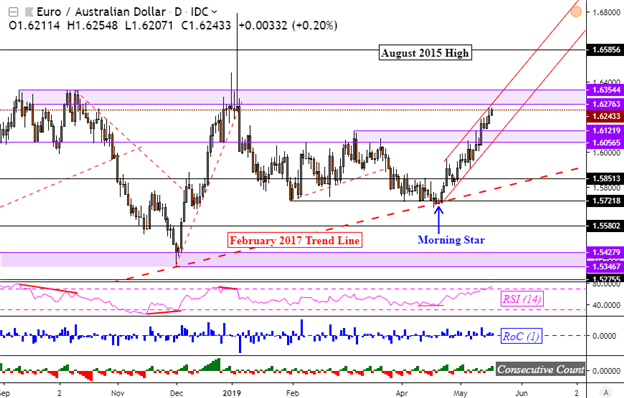 Looking for a fundamental perspective on Equities? Check out the Weekly Equity Fundamental Forecast