The Australian Dollar made modest immediate gains on Tuesday following the Reserve Bank of Australia’s decision to leave interest rates alone yet again. The Official Cash Rate thus stays at the record, 1.50% record low in place since August 2016.

The RBA’s accompanying statement went very much with the form of recent months. It noted low, stable inflation, labor market strength and the increase in global downside risks. Governor Philip Lowe will probably add more detail later as he is scheduled to speak in Sydney on Wednesday.

AUD/USD rose in the immediate aftermath of the decision, possibly on some relief that the RBA has not become any more dovish in its outlook. However, those gains were short-lived and there was little here to suggest that Australian rates are going anywhere soon. 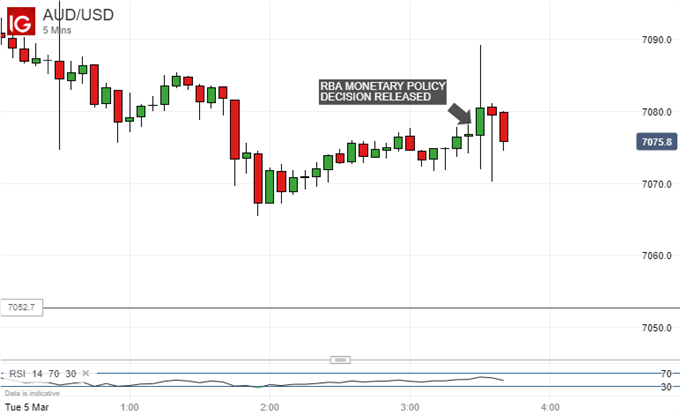 On its broader, daily chart AUD/USD remains above the downtrend channel which characterized much of 2018 as US interest rates rose and Australian rates remained stuck. Aussie bulls have benefitted this year from a rethink about the Federal Reserve’s intentions, and also from the stoking of risk appetite occasioned by expectations of a durable trade settlement between China and the US. 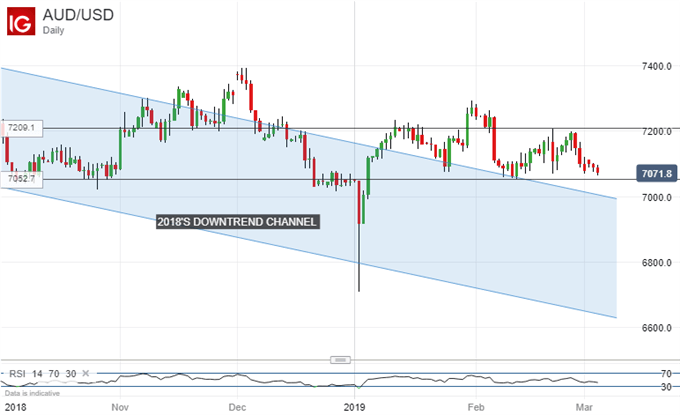 Still, the Australian Dollar would appear to lack interest rate support of its own, with domestic futures markets pricing in a quarter point cut to the Official Cash Rate by April of next year. With inflation still stubbornly below the RBA’s 2% target this seems unlikely to change anytime soon. While overall risk appetite is likely to play its part in AUD/USD direction, it is notable that the pair has been stuck in a new overall downtrend since late January.