The Australian Dollar was steady following the release of monetary policy meeting minutes from the Reserve Bank of Australia which, while hardly joyful, were no gloomier than recent former editions.

The minutes referred to the March 5 monetary policy decision, which was to leave the key Official Cash Rate on hold at the 1.5% record low in place since August 2016. It is the longest unchanged rate in Australian history.

The minutes noted ‘significant uncertainties’ in the economic outlook, with scenarios in which rates might be raised or cut both foreseeable. This is in marked contrast to the RBA’s stance in 2018. Back then it said that a rate rise was by far the most likely next move, even if it didn’t come soon. However markets have had some time to get used to this change of rhetorical tack. The RBA first admitted that a cut was possible back in early February. 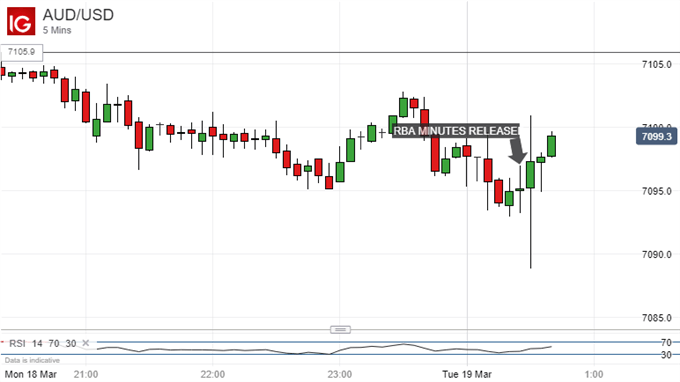 AUD/USD had trickled down in the runup to the release, with some investors perhaps placing modest bets on more dovish commentary from the central bank (not usually a bad bet). As it was the text saw very little change of message, if any, from the previous month’s and the Aussie crept back up again.

On its daily chart, AUD/USD remains firmly in the downtrend which has dominated trade since the start of 2018. The market now doubts that many more US hikes are coming, if any. This suspicion has been in large part responsible for AUD/USD/s ability to hold above the 0.7000 handle and probe back above 0.7100. 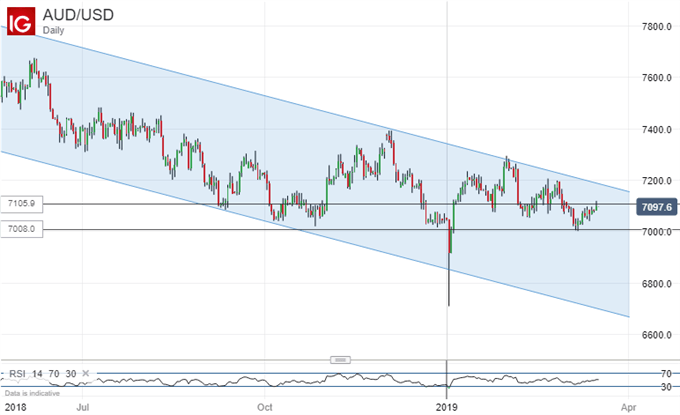 However, this renewed US Dollar bearishness has not been enough to break the Aussie’s overall downward impetus. Domestic inflation remains stubbornly low and Australian rate-futures markets continue to price in cuts. While this continues to be the case, the Australian Dollar will probably continue to lose ground.

However it could get a fillip if any durable trade settlement between the US and China is signed in the weeks ahead, and headlines around this are moderately encouraging at present. Australia has strong links with both global titans and has arguably the strongest interest in a deal of any third country.