The Reserve Bank of Australia announced its decision to leave interest rates unchanged at 1.50 percent with added dovish language which has put downward pressure on AUDUSD throughout today’s session. However, the move lower in AUDUSD could be exaggerated when considering the muted reaction in Australian OIS interest rate probabilities after the RBA released its latest monetary policy statement. 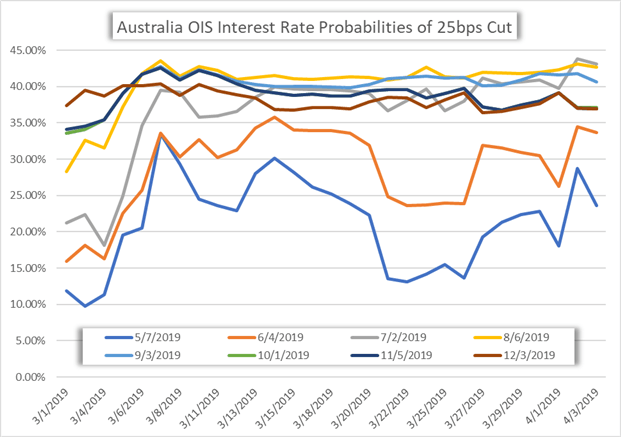 While the futures implied odds of a 0.25 percent cut to the RBA’s Overnight Cash Rate ticked up across the board headed into the central bank’s meeting today, probabilities returned to levels seen in mid-March when AUDUSD traded near the 0.7150 handle. Spot AUDUSD prices are now trading around the 0.7069 area. 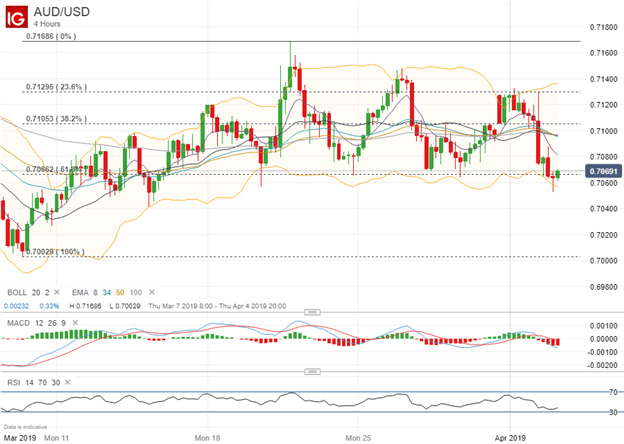 Further dovishness by the RBA could have been interpreted from the shift in language from keeping rates ‘unchanged which is consistent with sustainable growth’ last month to ‘setting policy to support sustainable growth in the economy’ today. Moreover, the RBA’s statement added that “growth has slowed and downside risks have increased.”

Although, Australia’s labor market remains strong with the unemployment rate dropping to 4.9 percent – the lowest reading since June 2011 – which has led to an uptick in wage growth. Also, Australian building permit data shattered expectations today with a reading of 19.1 percent month-over-month growth in February compared to estimates of -1.8 percent.

That being said, AUDUSD now rests at technical support at the 61.8 percent Fibonacci retracement line shown in the chart above. AUDUSD has traded in a relatively tight range between this level and March’s high. With the RBA now in the rearview mirror and little reaction shown in future rate cut expectations, the Australian Dollar has potential to rebound higher from today’s selloff. This could especially be the case if economic data continues to improve. Nevertheless, strength in the US Dollar could serve as a major headwind for further AUDUSD advances.