The Australian Dollar took a pounding on Tuesday following the release of more disappointing Chinese economic data, suggesting that the manufacturing sector barely expanded this month.

China’s official Purchasing Managers Indexes for April showed a manufacturing sector print of 50.1, below the 50.5 expected. In the logic of PMIs any reading above 50 signifies expansion for the sector in question, so this index just squeezes into the growth zone having spent three months in contraction territory at the turn of last year.

The service sector PMI also missed forecasts. It came in at 54.3, below the 55.0 expected. The composite, which combines the two was 54.3, which was still better than the 51.0 seen in March.

Overall these data take some of the shine off other recent numbers which had suggested that China’s economy was beginning to pick up some steam. Both Gross Domestic Product and corporate profit growth managed to beat expectations.

The Australian Dollar can act as the markets’ favorite liquid China proxy thanks to Australia’s famed raw material export links to the world’s second largest economy. It certainly seems to have done so in this case, slipping notably following the data release. 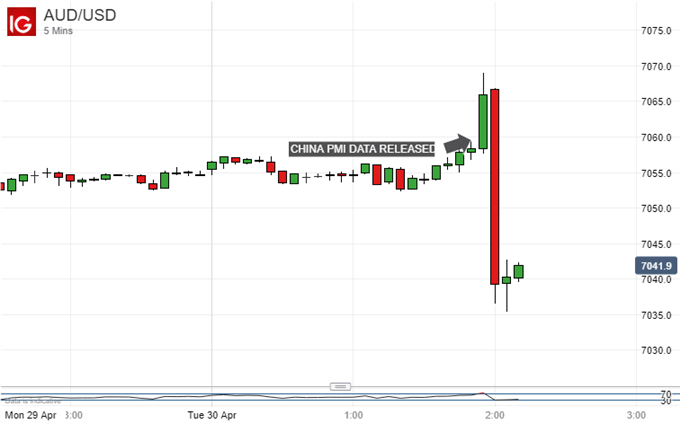 These numbers will reignite concerns that China’s vast corporate debt pile is simply not seeing the sort of activity growth needed to deal with. However, on the other side of things, weak data will probably mean that Beijing keeps gravitating toward economic stimulus, something markets usually welcome.

On its daily chart AUD/USD is firmly back within the long downtrend which prevailed for much of 2018 as US interest rates rose and Australia’s Official Cash Rate remained stuck at its now elderly record low of 1.50%. 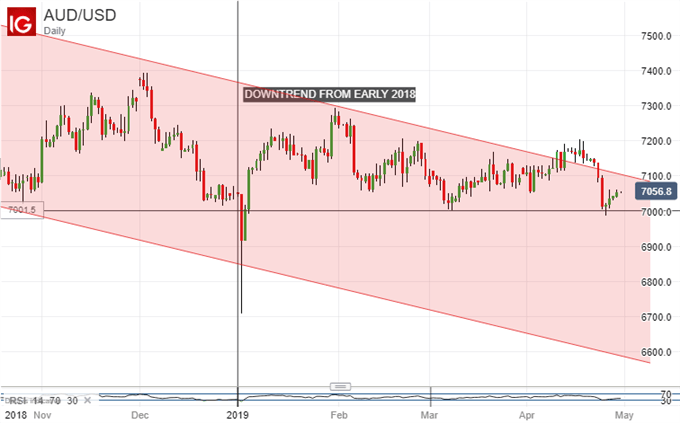 Admittedly investors have moved since to price in a much more cautious US Federal Reserve. But what goes for the Fed goes for the Reserve Bank of Australia too and, while US rates are now seen as likely on hold, at least one more cut is now fully baked into the Australian rate-futures curve.

The Australian Dollar can still do well when risk appetite is elevated, and any solid signs of a trade deal between the US and China will probably give it a significant boost. Australia has a foot in both camps.

However, the currency’s total lack of interest rate support will remain the backdrop to all AUD/USD trade and, while it endures, the bears are likely to keep overall control.