GBP price up on hawkish Bank of England

The Bank of England kept all its monetary policy settings unchanged Thursday, with Bank Rate left at 0.75% and its buying of UK government and corporate bonds at their previous levels.

However, GBP has been boosted by the minutes of the latest meeting of the Bank’s monetary policy committee, which ended today, and by the accompanying quarterly Inflation Report. 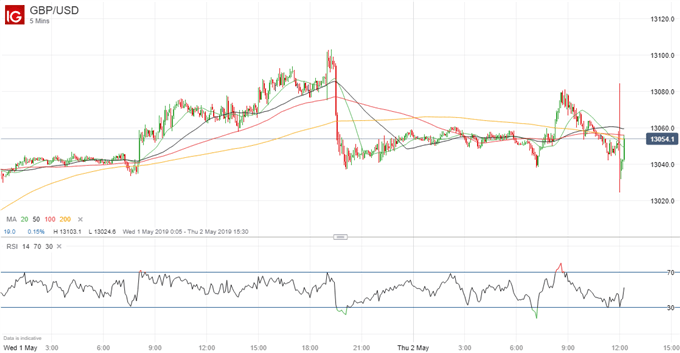 The Bank raised its forecasts for GDP growth while warning of the possible impact of Brexit. It now expects growth of 1.5% in 2019, up from its February forecast of 1.2%, and of 1.6% in 2020, up from 1.5%. It sees inflation increasingly above its 2% target and repeated that gradual and limited interest rate rises will be needed to meet that inflation target. It cut its forecast for unemployment sharply.

More details are expected when Bank of England Governor Mark Carney holds his regular post-meeting press conference at 1130 GMT to round off this “Super Thursday” schedule.

Looking further ahead, Brexit news will likely remain the most important factor for traders in GBP to watch. On the plus side, a “no deal” Brexit looks to have been averted for now and there are hopes of progress in the talks between the ruling Conservatives and the opposition Labour Party.

However, UK Prime Minister Theresa May has come under even more pressure this week after sacking Defense Secretary Gavin Williamson for allegedly leaking information from the National Security Council to a newspaper. In addition, local elections taking place in parts of the UK Thursday will likely punish the Conservatives for failing to deliver Brexit on time.

You can find the DailyFX forecasts for GBP in Q1 here

As for the UK economy, the latest data suggest growth remains tepid. Wednesday’s purchasing managers’ index for the manufacturing sector dipped to 53.1 in April from 55.1 in March and the service-sector PMI to be released Friday is expected to show only a modest increase to 50.4.

The next important day for UK data is the following Friday, with statistics on first-quarter GDP growth, industrial production, manufacturing output and trade all on the economic calendar.

Against this background, market pricing suggests that UK interest rates will be on hold for the rest of this year, and a quarter-point increase is not fully priced in until September 2020 – nearly a year after the latest Brexit deadline of October 31, 2019.

The Bank of England: a forex trader’s guide