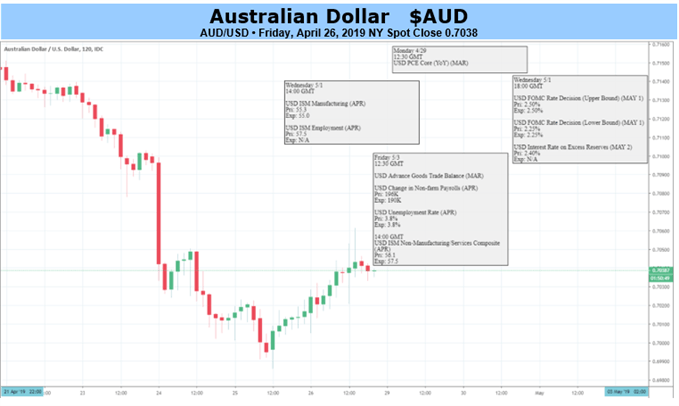 The Australian Dollar was clobbered last week by feeble domestic inflation data which, according to interest rate futures markets, have all-but nailed down two quarter-point cuts to the record-low Official Cash Rate over the next eighteen months.

Before those data came out, only one hack was fully priced. Now the betting has increased on a 1% OCR by February of next year, from 1.50% now.

AUD/USD had gained this year as the markets moved to price in fewer interest rate rises in the US. Now the realization has dawned that a cautious Federal Reserve is likely to mean at least equal caution in developed market central banks elsewhere. Sure enough, AUD/USD is back within the pervasive downtrend which endured for much of 2018.

The coming week will offer investors snapshots of Australia’s manufacturing and service sectors, along with equivalent, Purchasing Managers Index figures out of China. There may be scope for disappointment here based on other recent bellwethers- notably last week’s shock news of growth contraction in South Korea.

There may also be further headlines related to trade talks between China and the US. These concern the Australian Dollar market deeply given Australia’s strong trading links with Beijing and its security ties to Washington. All of the above may offer investors fairly binary short-term trading opportunity but the week’s main event for this market and all others will be Wednesday’s monetary policy call from the Federal Reserve.

The latest Reuters survey on the subject suggests that economists believe that US rate rises are over for now, with a few prepared to back a cut as the next move, albeit not soon.

All up then, a dovish Fed may relieve some pressure on the Australian Dollar, but the economic numbers may underwhelm and trade-deal headlines are hard to predict in advance. Therefore, it probably has to be a guardedly bearish call for the Aussie this week, even if the bulls seem unlikely to suffer quite as much of a pounding as they did last. 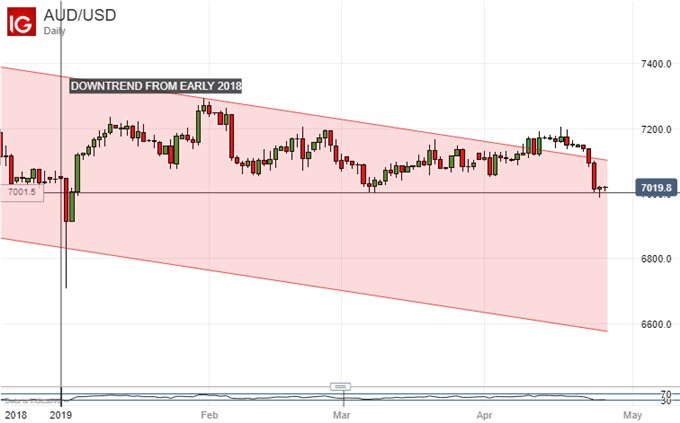