– Cryptocurrency markets have had a strong start to 2019: Bitcoin is up 44% year-to-date.

– Since the start of September 2018, the correlation between Bitcoin and USDTRY has been a statistically significant 0.78.

One possible explanation may be that much of 2018 was marked by steady improvement in demand for risky assets; safe haven currencies like the Japanese Yen and US Dollar were out of vogue up until September 2018.

Cryptocurrency Markets Have Had a Good 2019 So Far

Starting in September 2018, cryptocurrency markets started to turn around, in part, it appears, due to a desire for safe haven assets – but specifically, emerging market investors seeking foreign assets that provided liquidity in non-local denominated currencies.

Gains May Be Rooted in Developments in Argentina and Turkey

At the start of April, when we last checked in on Bitcoin prices and USDTRY, Turkey had just held local elections. At the time we said that “several minor obstacles appearing at the same time can prove a formidable obstacle.” Now, a new obstacle has appeared: the central bank’s independence appears increasingly under pressure after they decided to remove their rate hike bias.

Per the Emerging Markets Crisis Monitor, central bank independence is a crucial feature of long-term stability for a currency.

Reflecting this new obstacle, traders have pushed Turkish 5-year CDS prices to their highest level since September 2018 – the tail end of the last time EM FX contagion fears roiled currency markets. But it’s not just Turkey: Argentinian 5-year CDS have exploded higher in recent days to indicate the most credit risk since May 2015.

Reflecting economic and political stability, and in turn, the increase in credit risk in recent weeks, USDARS is up 19.6% this year, while USDTRY has added 12.2%. 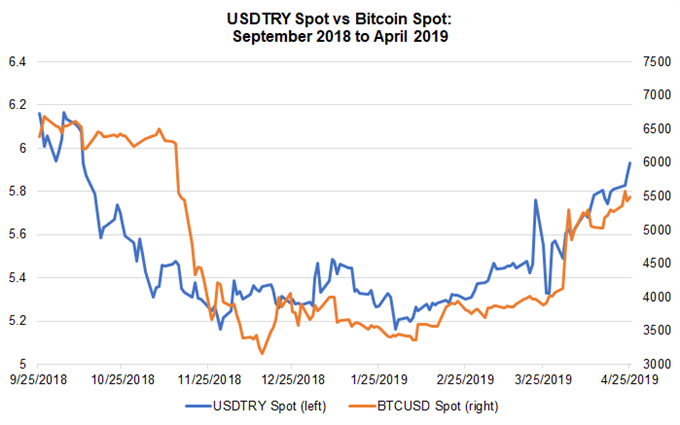 It still holds that the recent Bitcoin rally has gone together with weakness in EM FX, particularly with the Turkish Lira. Since the start of September 2018, the correlation between Bitcoin and USDTRY has been a statistically significant 0.78. Meanwhile, the rolling one-month and three-month correlations are 0.77 and 0.92, respectively.

It thus still holds that if Bitcoin prices and the cryptocurrency market in general are going to stay with their bullish turn in 2019, the best hope remains more weakness in emerging market currencies like the Argentinian Peso and Turkish Lira.