Want to know more about Bitcoin and other cryptocurrencies? Try the free DailyFX Guide.

Bitcoin prices surged during Tuesday’s Asian session, briefly reaching the $5,000 point before heading back down.

The world’s biggest cryptocurrency had risen by more than 20% on the day at one point, to levels not seen since November 2018. 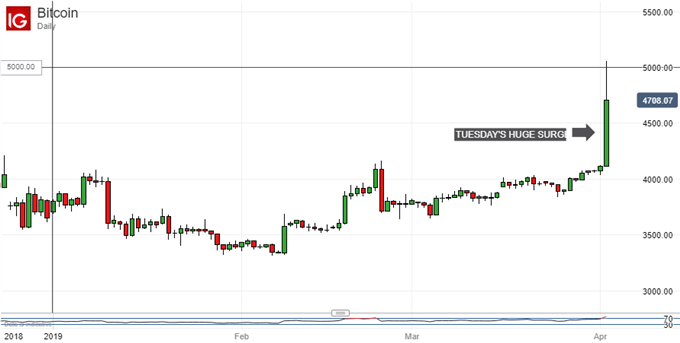 There was no immediately obvious explanation for this astonishing leap, which came in an Asian session of modest gains for local stocks and a return to winning ways for the US Dollar as Stateside yields rose.

Days with price changes of huge magnitude have been rare for cryptocurrencies in 2019 but were far more common during the breakneck trading days of their epic rise and fall two years ago. Whatever the eventual reason behind Tuesday’s surge it will serve as a perhaps overdue reminder that Bitcoin remains subject to the sort of volatility and speculation which render its utility as a currency so minimal.

And Bitcoin still commands a fraction of the prices reached back in December 2017 when it climbed as high as $19,600 to post its record high. Within a year it was trading below $4,000.

Bitcoin certainly outperformed other cryptocurrencies on Tuesday, but there were strong gains to be seen across the complex, with gains of over 10% seen for the likes of Ether and BitcoinCash.

At the time of writing 0600 GMT Tuesday, Bitcoin was looking pretty comfortable close to its new peaks, having only retraced as far as $4718. It will be incredible if the majority of these gains hold through the remainder of the global trading session. The crypto space will repay close watching for the next several hours.