– Recent actions – or not taken – by the Bank of Japan over the past week suggests that they are running out of policy solutions.

– Receding Federal Reserve rate hike expectations have helped push the US Dollar to a fresh 2019 high.

The US Dollar (via the DXY Index) has shaken off several months of consolidation versus the other major currencies, with the DXY Index pushing to its highest level of 2019 and its highest price since June 2017. The recent rally may have to do with the perceived juxtaposition between the Federal Reserve and other central banks.

While expectations around US economic growth have steadily improved over the last few weeks, hopefully culminating in a Q1’19 US GDP report that shows recession fears were overblown, growth concerns have cropped up elsewhere in the world. For the Bank of Canada, this week’s policy meeting saw the removal of language regarding the potential for rate hikes this year. For the European Central Bank, concerns that growth and inflation forecasts are too optimistic have gained traction as PMI readings have faltered.

That says nothing of the issues facing the other central banks, or geopolitical events like the US-China trade war or Brexit. In a sense, the US Dollar is “the best house in a bad neighborhood,” rallying as other currencies have been encumbered by their own issues.

Rates markets have been stable in recent weeks, particularly as the odds of a Federal Reserve rate cut in 2019 have diminished. At their apex at the end of March, markets were pricing in a 58% chance of a 25-bps rate cut in September; now, those odds more closely resemble pricing for the December meeting (61%). Rate cut odds have been mostly stable in April; in our last update, the odds of a December rate hike were 56%. 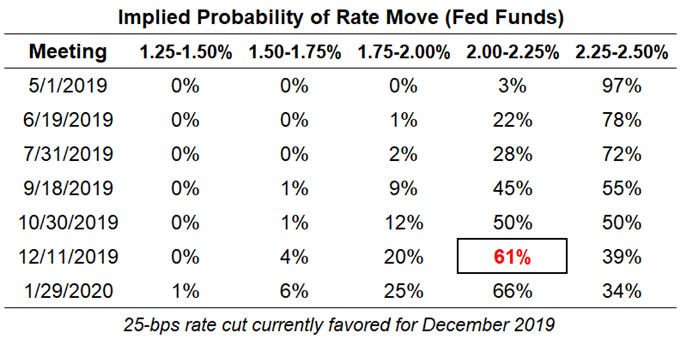 We can measure whether or not a rate cut is being priced-in for 2020 by examining the difference in borrowing costs for commercial banks over a one-year time horizon in the future. Over the past two weeks, rate expectations have been mostly stable, with rates markets discounting -26.5-bps by the end of 2020. 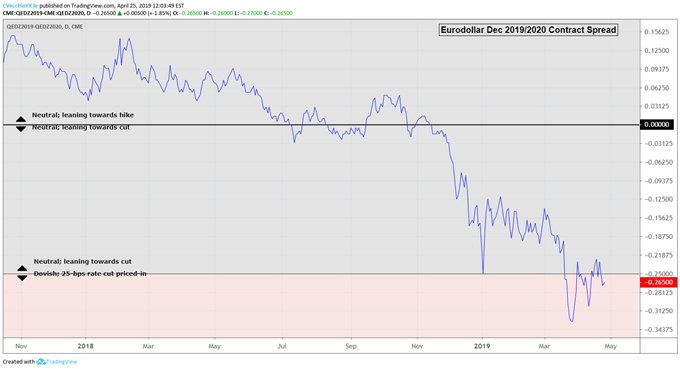 Readings have oscillated around one cut being priced-in for most of April. Stability in 2020 rate expectations has given the US Dollar breathing room to rally as odds of a cut in 2019 have been pushed back. It would appear that this “twist” in expectations is occurring as growth expectations abroad have cooled 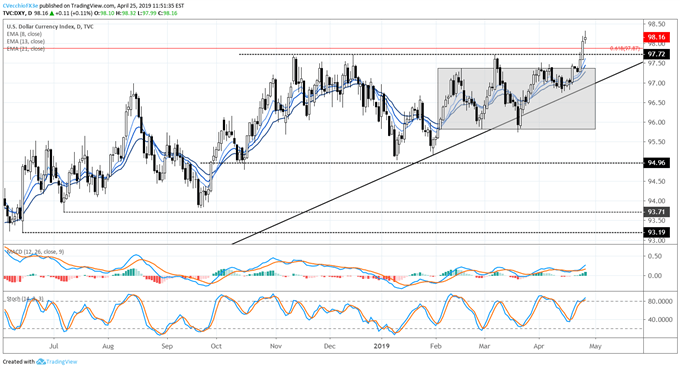 The US Dollar’s bullish breakout attempt is under way. After clearing out topside resistance dating back to November 2018 around 97.72, the DXY Index now finds itself above the 61.8% retracement of the 2017 to 2018 high/low range. In technical analysis, Fibonacci retracements are based around the concept of the Golden Ratio, 1.618, or phi; the 61.8% retracement is the inverse of phi and is deemed the ‘make or break’ level to determine if price action is ready to embark on a new trend. As such, this may be considered a strong signal that the period of sideways consolidation indeed over, and US Dollar bulls are in control.