How Much Lift is the Aversion of a US-Mexico Trade War Worth?

The new trading week began with a favorable fundamental development – though the balance of negative-to-positive week beginning catalysts is still heavily skewed in favor of the bears. Friday evening, US President Donald Trump tweeted that an agreement was reached between US and Mexican negotiators on the latter’s efforts to curb migration destined for the United States. That news would in turn obviate the risk of a 5 percent tariff on all Mexican imports into the US which was due to go into effect Monday had there not be an agreement in place. The news was clearly a relief for Mexican assets which could have been in the same position as China struggling under its own standoff – just without the scale to hold off the deeper economic cuts. The biggest jumps would be registered in the Mexican Peso with the steepest single-day USDMXN exchange rate drop in 11 months as well as the Mexican ETFs (like the MSCI’s) though the local equity index didn’t seem to enjoy the same windfall.

Chart of USDMXN and 1-Day Rate of Change (Daily) 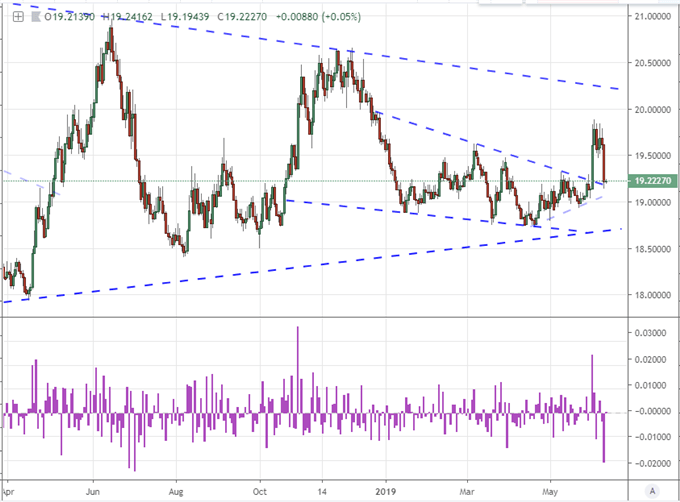 As with many breakthroughs forged nowadays, the US-Mexico agreement carries some significant caveats. According to President Trump, the deal struck between the two included additional elements that he did not initially enumerate, and which he later suggested would entail purchases of US agricultural goods. Mexican authorities have disputed that they agreed to such purchases, however, which could potentially pose a problem. Trump has threatened to move forward with the tariffs if Mexico were to reverse course at all from the agreement, and it isn’t clear on which interpretation of the deal he is going to make that decision. That said, it seems the White House is looking to establish a baseline for how the trade wars can eventually find a successful conclusion; so it is likely that the matter is worked out. 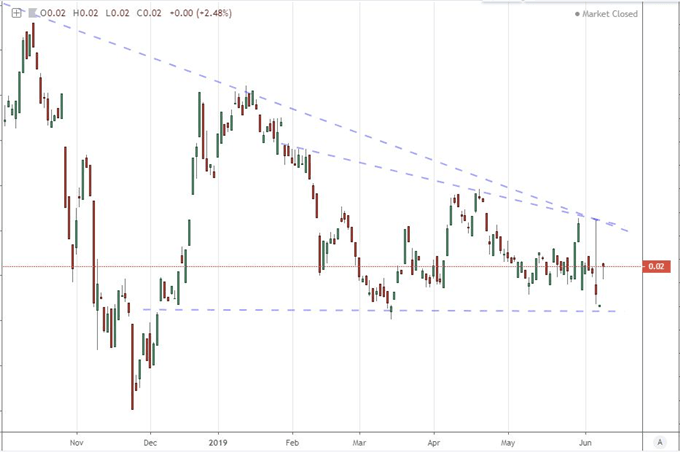 As far as how much lift the alleviation of such a threat can confer to targeted assets and the broader market, it would be prudent to take a more cautious interpretation. Relative to the long-standing trade war escalation between the US and China, this particular warning from the White House was only issued around a week before. That announcement only contributed modestly to the slide that was already unfolding with a critical S&P 500 technical break, and the recovery that began only a few trading days later seemed to defy the standard playbook for seeding a relief rally. If there wasn’t a significant discount afforded to fear of fallout from this standoff, there certainly isn’t a windfall of untapped growth behind it. 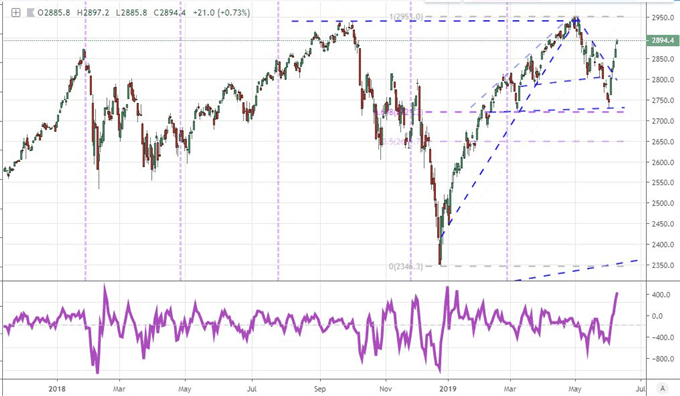 An Uncomfortable Desert of Fundamental Drivers to Carry the Risk Recovery

Trade wars remains one of the most loaded, systemic themes in the global markets – even if the situation between the US and Mexico isn’t capable of leveraging a bigger speculative impact. The relationship between the United States and China is rockier with motivated peers who have appetite to capitulate to the other. The last ‘standard’ trade war move was China’s retaliation for the Trump administration’s increasing its tariff rate from 10 to 25 percent. China has yet to match the Huawei ban but it has seeded market concern with possible options through blacklisting US tech firms or using rare earth materials to significantly impair key supply chains (such as cellphones). The next, known milestone in the US-China trade war is the G20 meeting scheduled for the end of the month. Asked in an interview if he would expand tariffs to an additional $300-plus in Chinese imports if President Xi didn’t show up at the summit in Japan, Trump said he would.

Another fundamental theme of dubious support for the markets is the state of health for the global economy. Over the past few weeks, we have seen official GDP reading flag and more timely PMIs warn of a fast-stalling pace of expansion. Individual bright spots like the hold out from US service sector activity and some pockets of US sentiment are not comprehensive enough to hold back the tide of evidence in a concerted slowdown. To start off this new trading week, the Japanese Eco Watchers survey extended its slide into contractionary territory while the UK reported a dive in monthly activity. Ahead, data like the Australian and US business sentient surveys, European investor confidence and UK employment report will all dance around the fringes of growth. It is worth nothing that the US – the world’s largest economy – still sports an inverted yield curve and more attention to this wonky reading than is strictly expected for such a measure. 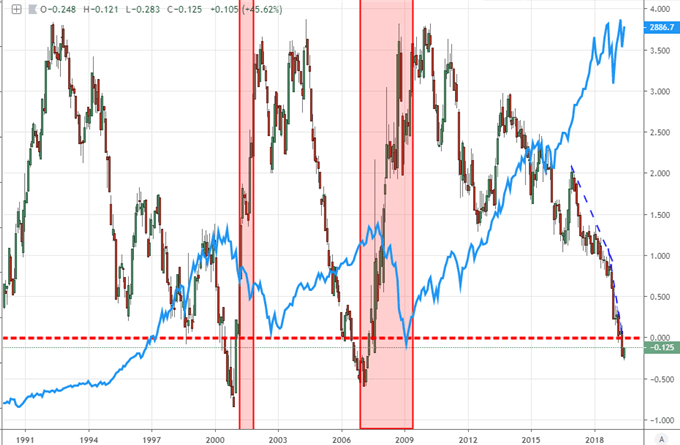 Where economic activity is flagging and ‘external risks’ are intensifying, there is a belief that certain outside measures of support will rush in to fill the speculative gap. Central banks have played that unmistakable glue throughout the past decade. Anticipation for Fed support through rate cuts has increased sharply just this past month. Previously, the market’s read was that previously forecasted rate hikes were just gridding down to a state of no change. However, in the past weeks, we have a neutral bearing turn dovish. Given the hikes from the Fed since its first move in December 2015, there is room for easing that can indirectly prop up speculative interests. However, there has been considerable lift already priced in from a proactive monetary policy authority and the tangible updates for rate speculation have thinned out owing to blackout period before the FOMC’s next rate decision next Wednesday. While many other major central banks are willing to sacrifice themselves to the alter of the speculator, they don’t have nearly as much to offer as the previously-normalizing Fed.

Chart of Fed Probabilities According to Overnight Swaps (Daily) 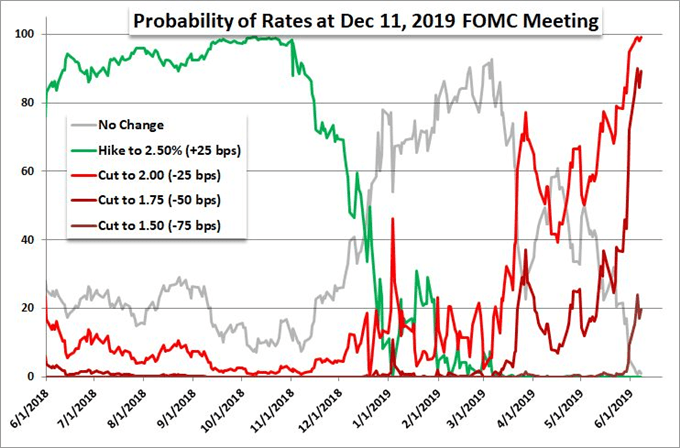 Dollar Can’t Pin Down Its Driver, Euro Tethered to Italy and Pound Can’t Even Find a Clear Brexit Drive

As I contemplate the outlook for the US Dollar over the third quarter for our regular updates, it is clear that the currency remains pulled between key fundamental roles. Is it a safe haven or a carry currency? Does the Greenback face the systemic risks posed from economic pain lapping at its shores or even the collective retaliation for trade wars felt by so many of its trade partners? That is not clear, and so the Dollar suffers for the ambiguity. The DXY Index posted a technical break of channel support through Friday this past week, but there was no follow through to meet the currency Monday. Instead, a gap higher and subsequent hold above the 200-day moving average would leave the market unclear as to where it stood on the fate of the currency – or even what was the line traders should follow for subsequent moves. 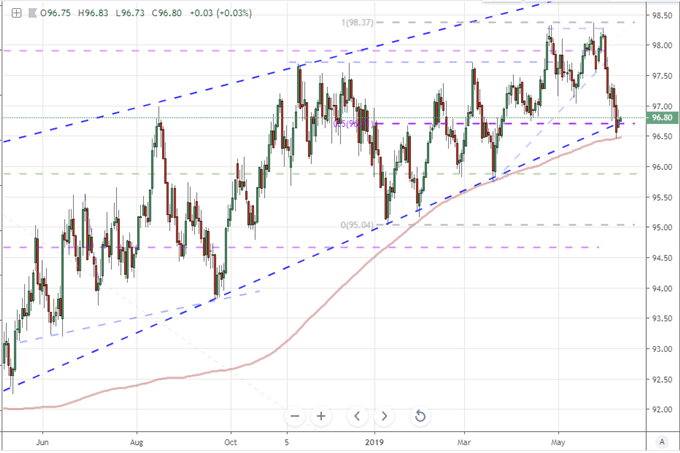 For the second most liquid currency in the FX realm, the state of monetary policy for the European Central Bank (ECB) has taken a backseat. The warnings issued form the larger group hasn’t altered the dovish course solidified after the introduction of the targeted-LTRO that followed so soon after the end of the stimulus program (QE) in December. Presently, the attention has turned back onto the perceived stability of the region’s financial and economic backdrop. The greatest threat to the peace in Europe is from its third largest member economy: Italy. Following its strong showing in the EU parliamentary election, a threat from the Prime Minister seems to have unified the coalition government behind a common objective: to defy the European Community and its financial rules. The Eurozone finance ministers are due to meet Thursday and broader European Union ministers Friday. Italy will be at the top of their list of concerns – and it should be first on your list as well.

Another benchmark currency that is facing trouble catching traction owing to the deferred resolution to the markets concerns is the British Pound. We will not see any reliable milestones in the status of Britain’s divorce from the EU until the Conservative party establishes its leadership. Monday, the 10 primary candidates for the top job were laid out with a significant advantage to Boris Johnson and Dominic Raab sitting in second with a sizable gap. Resolving this incredible weight hanging over the Pound’s head is essential if the currency can reasonably be expected to establish a clear and consistent trend. In the meantime, economic updates that show the economic backdrop struggle with a 0.4 percent contraction in April’s GDP, a record-breaking drop in vehicle production and 3.9 percent drop in general factory output simply raises the fundamental tab to be reconciled later. We discuss all of this and more in today’s Trading Video. 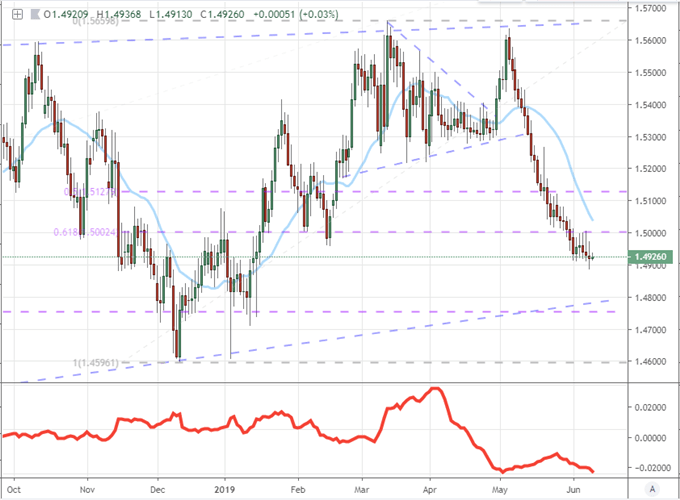