The Brazilian Real and Ibovespa index will be closely watching the upcoming vote by the Congressional Constitutional and Legal Affairs Committee (CCJ) on the constitutional legality of Bolsonaro’s pension reforms. If it passes, it will then be moved to a special commission where it will endure another round of votes. For the time being, investors are anxiously waiting to see if any of the provisions were watered down.

The Labor and Pensions Secretary Rogerio Simonetti Marinho assured market participants that the original plan will still save approximately 1.1 trillion reais over the course of a decade. Originally, the vote was supposed to take place last week but was delayed. The postponement was negatively interpreted by markets which led to capital flight from the Real and Ibovespa.

The performance of Brazilian assets is closely linked to the developments on the pension reforms. Want to know why? See my updated Brazilian Real and Ibovespa forecast here!

Adding to the risk docket are threats of possible protests and obstructions from truckers who are expressing discontent over high diesel prices. In 2018, a trucker-led strike paralyzed the economy after protestors blocked highways and other key routes that were vital for economic activity. In an economy plagued by broad underperformance and growth rate cuts, the last thing the government needs is a fresh wave of protests.

Even if the reforms gain the constitutional stamp of approval and a potential clash between the government and truckers is avoided, Bolsonaro still faces an uphill battle. Between bribery scandals and political infighting, the outlook still remains uncertain over whether the reforms can be pushed through. Local markets will likely continue to fluctuate in complete lockstep with developments over the pension reforms. 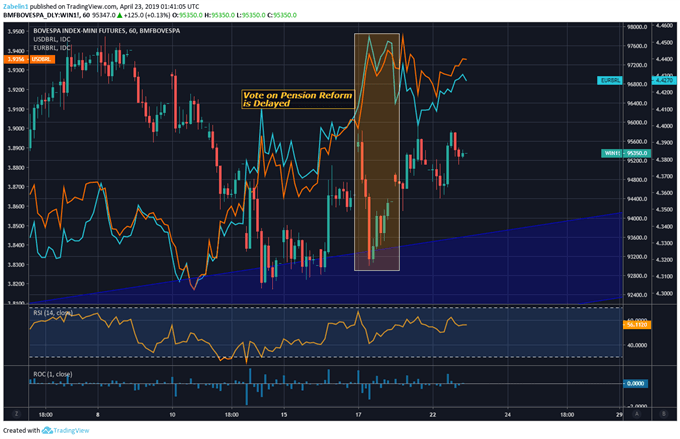