As we write, the ruling UK Conservative Party have lost over 600 seats in the local elections, and if these losses are translated into a national vote, the Conservative and Labour parties will be neck and neck on 28% of the vote while Others will have 25%. UK politics look set to re-assert themselves and Sterling is very likely to suffer.

The DailyFX Q2EUR Forecast is available to download including our short- and medium-term look at Sterling (GBP).

The outlook for Sterling remains neutral for next week in what could turn out to be a tough week for UK PM Theresa May. Thursday’s local council elections sees the ruling party lose hundreds of seats as the UK public show their displeasure at PM May’s handling of the Brexit negotiations. Talk still swirls of a possible indicative vote of no confidence in PM May, and this volume will turn higher as the local election losses are put into perspective. As we write, the current results would translate into both the Conservative and Labour Party polling 28% of the national vote with Others taking 25%, a potentially disastrous and fragile political set-up. The PM also sacked her defence secretary Gavin Williamson mid-week over, alleged, newspaper leaks concerning the Huawei and their potential involvement in the future UK 5G networks.

This week’s BoE monetary policy meeting saw all measures left unchanged but in the QIR report, governor Carney hinted that more than one interest rate hike may be needed, not an outright hawkish signal but one to take note of. The BoE increased their GDP forecasts going forward while downgrading this year’s inflation outlook before pushing it higher again for 2020 and 2021. Next Friday the Office for National Statistics will release Q1 GDP data which may see q/q growth of 0.4% to 0.5%, up from 0.2%, a healthy growth rate despite Brexit worries.

Next week commentary is scheduled from BOE members Jon Cunliffe (dove), Andy Haldane (hawk) and Dave Ramsden (dove) which may give the market some more background behind the latest BoE meeting.

GBPUSD remains above 1.3000 despite the local election losses as investors seem reluctant to short the British Pound at current levels. While this stance has held over the past few weeks, the Brexit noise-o-meter is being turned up and has been seen in the past months, GBP reacts to tweets and ‘sources’ stories more than monetary policy. The current uplift may hold but sterner tests lie ahead around the 68.2% Fibonacci retracement level at 1.3177. 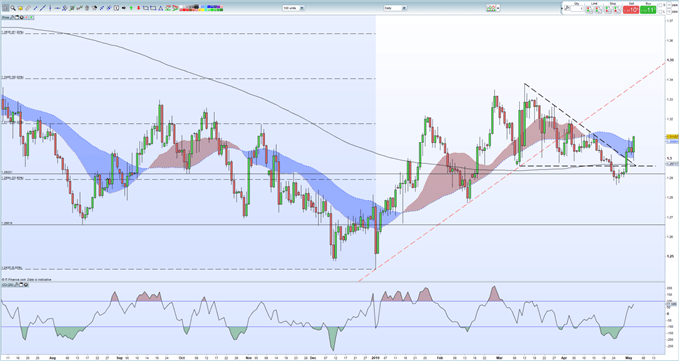