The British Pound outperformed against its major counterparts on Tuesday on the latest Brexit developments. After having her EU-UK divorce deal rejected three times, following Parliament’s failure for a second time to find a consensus on an alternative way forward for a withdrawal agreement, UK Prime Minister Theresa May conceded that she must work out a cross-party approach for reaching a deal.

This left the door open to a ‘soft Brexit’ after fears of a ‘no deal’ increased in recent days. Stocks on Wall Street got a slight boost in the aftermath of these developments having spent most of the time trading lower beforehand as anticipated. By the end of the session, the S&P 500 was unchanged from Monday’s close. Still, the damage had already been done at that point to currencies.

The pro-risk Australian and New Zealand Dollars aimed lower, with the former weighed down by an RBA rate decision that left a few small hints that it is keeping a close eye on developments that may pose a risk to their economic outlook. Meanwhile, the anti-risk Japanese Yen and Swiss Franc were some of the best-performing majors on Tuesday. Anti-fiat gold prices rose as the US Dollar fell when GBP gained.

Ahead, sentiment will be awaiting Chinese Caixin PMI services data after respective manufacturing outcomes improved earlier in the week. If the upbeat results echo into the next round of data, we may see some market optimism. We also had an update from US President Donald Trump, who said that trade talks with China are ‘going very well’. As such, we may see Asia Pacific stocks trade narrowly higher. This may bode ill for the Japanese Yen while the Australian and New Zealand Dollars rise.

AUD/JPY is an interesting pair to watch for pure sentiment-based moves. The pair has been in limbo since breaking under an ascending triangle bearish formation. In the meantime, it has been trying to break above a near-term falling resistance line from February. For more timely updates on the Aussie and AUD/JPY, feel free to follow me on twitter here @ddubrovskyFX. 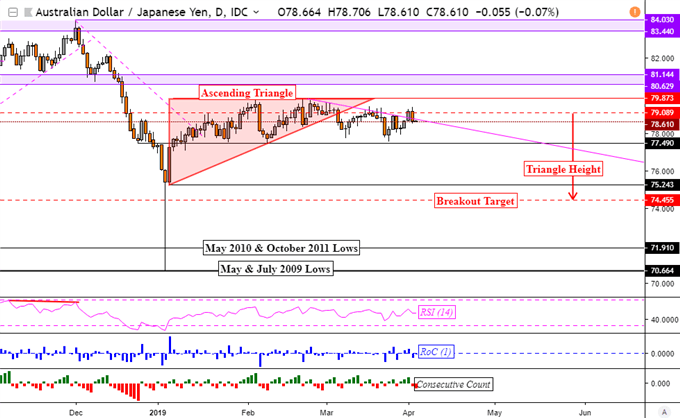