Looking for a fundamental perspective on Crude oil? Check out the Weekly Crude Oil Fundamental Forecast.

My technical outlook for the British Pound over the coming week is neutral…but that doesn’t mean it will be quiet. In fact, the reality is likely to be exactly the opposite of the calm that a ‘neutral’ setting would imply. It is likely that the currency maintains its struggle to set a clear and consistent course through the near future, but volatility will likely remain explosive for the currency. There is little surprise that Brexit is a key concern for the currency and charts traders should not write off that fact just because it strays into the fundamental realm. So long as the headlines signal that there is no clear course for the UK’s divorce from the European Union, the market will not fully commit to a clear direction on the currency. There is too much influence tied into the state of the economic relationship (readily seen in EURGBP) for the more stoic and systemic market interest behind Sterling capital flows to make a commitment.

In the absence of this deep current to stabilize markets, more volatile and speculative elements will exert greater influence over price action. Hence, we are left with exceptional volatility but limited capacity to spark a trend. Below is an equally-weighted index of the Pound with a 20-day average true range (ATR) as a percentage of current spot. The activity measure is at its highest levels since November 2016 – shortly after the initial Brexit detonation. Tight ranges do not survive such volatility for long. It can readily lead to ‘technical breaks’ but it doesn’t necessarily offer the transition to a reliable trend unless underlying speculative hurdle is crossed. This is one of those times where technical traders should keep tabs on the ‘other’ analytical technique. 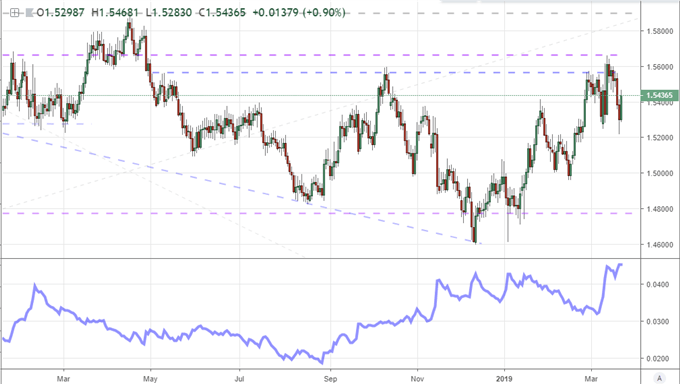 From the benchmark GBPUSD, we find the same general conditions registered from the Sterling index above: there is considerable volatility with unmistakable range. The volatility range on this particular pair is similarly very high but not as extreme as the individual currency in relief – the Dollar’s restraints likely bear on this relationship. To the topside of this pairs, we have a resistance just shy of 1.3400 born of the confluence in a rising trendline of highs back to July as well as the midpoint of the 2018-2019 bear wave. The lower threshold is less overt. The 200-day moving average and a short-term (though questionable due to the January flash crash) trendline coincide around 1.2975/95. I would hold neither to hold up against further bouts of extreme volatility nor to spark a reliable trend.

GBPUSD and the 50-day and 200-day Moving Averages (Daily) 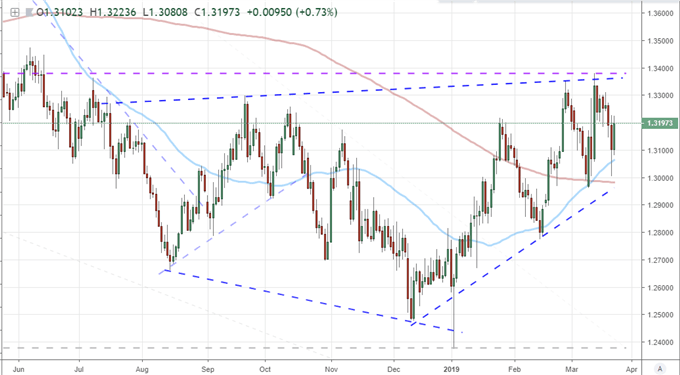 For those that follow volatility measures regularly in their analysis, the paths of implied (expected) and historical (realized) activity measures can offer more distinctive insight on the markets. Below is the GBPUSD overlaid with the CBOE’s volatility index derived from the same pair. On a close-over-close basis, the measure is remarkably high but it didn’t overtake the November peak when Prime Minister May’s withdrawal proposal worked out with the EU was rejected and the future of the Brexit proceedings were thrown into disarray. However, if we look at the measure on an intraday basis, it charged to the highest since the aftermath of the initial Brexit vote (the later months of 2016). A comparison of this measure and the 20-day ATR can offer useful analysis.

Chart of GBPUSD and the CBOE’s Pound Volatility Index (Daily) 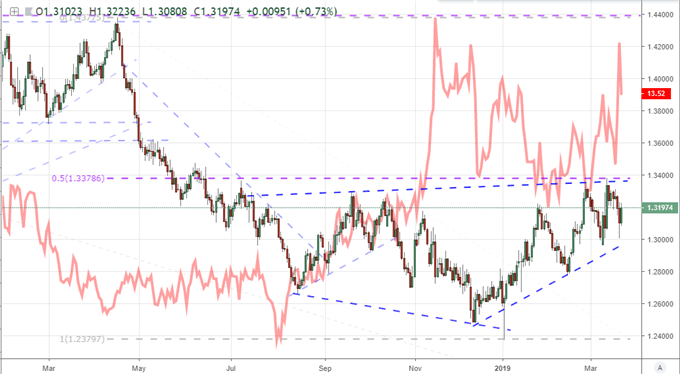 Another important cross to watch for those that want to get a technical perspective of a fundamentally-distracted currency is EURGBP. The Pound is the focal point of Brexit but the Euro (and EU) have as much to lose if the negotiations turn out poorly. This pair is therefore understandably afflicted. The 20-day ATR here is extreme and it serves as a good reminder that technical boundaries are not the only consideration when trading Sterling. The slide through 0.8625 back in March was a long-term range support break and it seemed like the tides would shift on a multi-year congestion pattern that followed an impressive rally from the pair. As significant as the cue was, momentum would never set up camp. Friday’s drop was the second largest single-day loss in two years. That is the kind of situation we are dealing with here – not the slow and methodical setup to a inverse head-and-shoulders pattern that you may expect from a look at just levels. 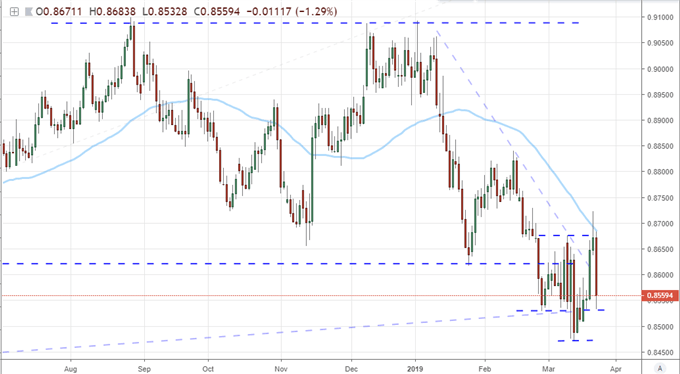 From the third most liquid Pound-based major, we have a combination of the Sterling’s own volatility and the addition of the Yen’s penchant to reflect market volatility. Here, the floor of a rough rising trend channel from the January flash crash is mingling with the 50-day and 200-day moving averages around 144.25/75. I would not expect this zone of support to be respected should we feel subsequent waves of volatility similar to what we’ve experienced the past two weeks. For what it’s worth, the collective resistance the trendline pulled from a descending series of highs and 38.2 percent Fibonacci retracement of the February 2018 high to flash crash low (excluding the tail) around 148.75 would likely carry greater weight. Yet, the higher the volatility, the more intangible the border becomes. 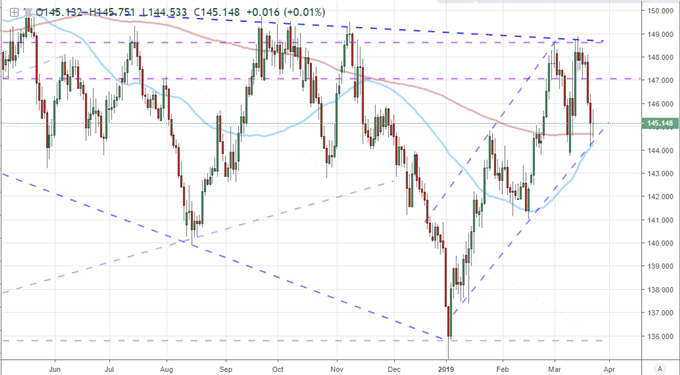 Finally, a look at speculative positioning reveals there is an intent gap between the larger and smaller players in the market. The large speculators measured in the CFTC’s Commitment of Traders (COT) report reveals that futures traders of size took a considerable gamble by significantly shifting away from the net short view through Tuesday (when the data collection stops for the week). They were likely expecting a Brexit breakthrough and the same from the Cable. That didn’t occur. It is also true that total speculative interest is softening in the face of volatility. Retail traders are not so put off by the activity levels. While total retail positions measured by IG’s Client Sentiment data has been consistent, the swing between a net long and net short position has been dramatic. Reactive and range bound market conditions are what retail traders typically look for – dangerous but temporarily appropriate. Follow what retail traders are doing, but they will likely put more faith in technical boundaries than our current conditions general deserve. 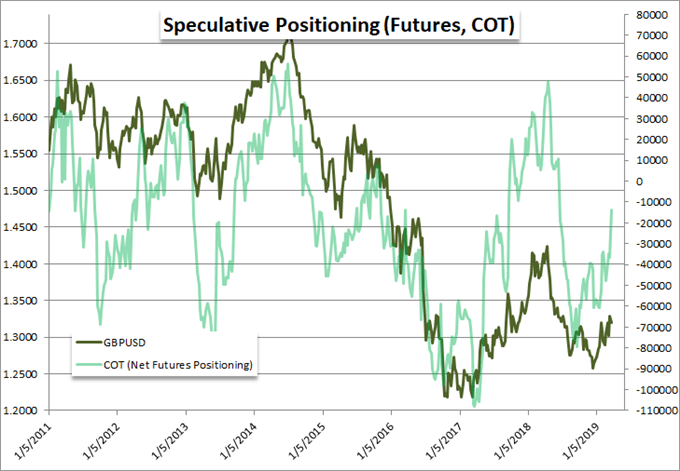 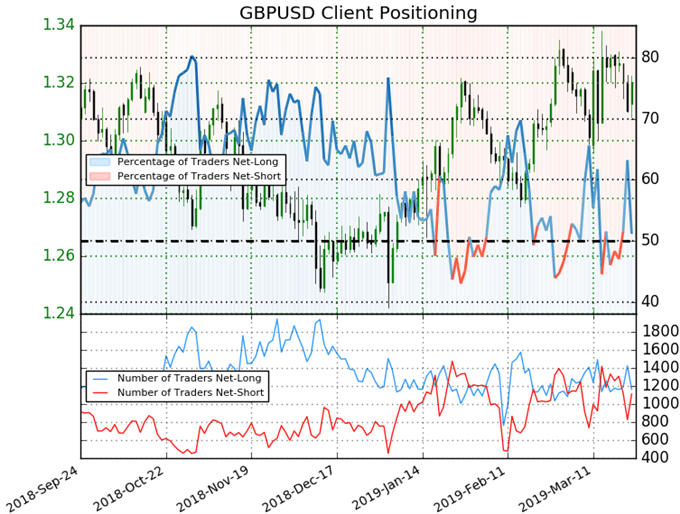