The Brazilian Real and Ibovespa had a relatively mild reaction from the release of the Banco do Brasil’s meeting minutes. As anticipated – the publication reiterated concerns the central bank expressed at the last policy meeting, pointing to “challenging” global conditions and the impact of fiscal uncertainty on local economic activity. This was in reference to the Brazilian government’s market-disrupting pension reforms.

Decaying US-China trade relations have roiled global markets and pressured equities lower, causing the benchmark Ibovespa index to break below a major support while USD/BRL edged closer to resistance. As one of the biggest producers of iron ore – with a large sum going to China – slower growth in Asia would further cloud the future of Latin America’s largest economy. 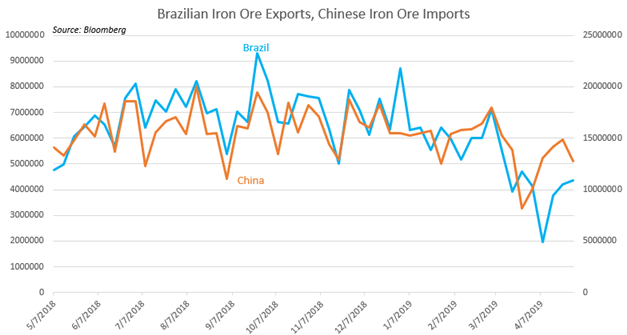 The more immediate event risk that will likely capture the attention of traders with exposure to Brazilian assets is the release of local economic activity data. This particular indicator may carry greater weight because of this month’s upcoming GDP data publication. Chinese industrial production data may also give Brazilian futures markets a jolt while the exchange in Sau Paolo is closed.

It is largely expected that Brazilian GDP will not show an impressive reading considering that much of the economic turmoil in 2018 spilled over into the new year, according to the central bank. Looking ahead, US-China trade war developments in addition to updates on President Jair Bolsonaro’s pension reform will likely continue to be the main driver of Brazilian asset price action.