The Brazilian Real and Ibovespa will likely find a boost early into Wednesdays’ trading session following the announcement that Bolsonaro’s pension reforms survived the first round of voting. After eight hours of debate, the Constitutional and Justice Committee in the lower house voted 48 to 18 in favor of granting constitutional legality to the pension reforms.

The major step forward will likely reinvigorate hope that the government may yet be able to pass the pension reforms before 2020. However, there remains an arduous journey ahead for the bill with anticipations that progress may be slow, and the key piece of legislature may be watered down by the time it is signed into law. Many economists and policymakers believe the future of Brazil rests on these reforms.

The disorganized government still has to contend with a fractured Congress where the difficulty of gaining cross-party support is compounded by Bolsonaro’s reluctance to cooperate out of a concern it could lead to compromise and corruption. There is also a lingering concern about a possible trucker strike over increased diesel prices which has the potential to disrupt market activity and further weigh on sentiment.

Looking ahead, Brazilian assets will continue to find themselves caught in a tug of war between fear and hope over the ability of the government to pass the reforms. For the past few months, the performance of the Real and Ibovespa has moved in almost complete lockstep with developments over the controversial bill. When trading BRL, keeping up to date on these reforms is crucial to maintain a well-informed trading strategy.

How Does Brazil’s Legislature Work? 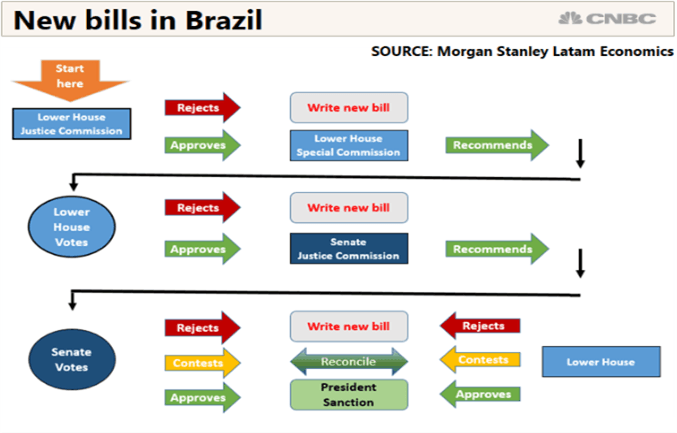