The Brazilian Real and the benchmark Ibovespa equity index will be closely watching the release of local PMI data against the backdrop of increasing optimism over local pension reforms. Despite the many hurdles that lie ahead for the Brazilian government, market participants are growing increasingly optimistic about the government’s ability to implement these key structural reforms.

The recent publication of weak industrial production data – and last week’s publication of a quarter-on-quarter contraction for GDP – may spell trouble for upcoming PMI data. The previous reading for services showed 49.9 while the composite index showed a modestly higher reading at 50.6. The economy continues to struggle with lackluster growth and volatile political developments from the pension reforms.

More recently, Brazilian assets have been experiencing a large capital inflow, specifically the Ibovespa and MSCI Brazil 25/50 index-tracking EWZ ETF. After extending beyond the 4.000 landmark, USDBRL subsequently retreated, though the cause is primarily attributed to prevailing US Dollar weakness than a surge in the Brazilian Real. Since May 20, the pair has fallen over six percent.

The pair’s rapid retreat from the 4.000 landmark also shows that traders are not yet ready to be that bearish on the Brazilian Real. If the outlook for the pension reforms sours, it is not outlandish to suggest that the pair may retest the 7-month high. Another factor that may push it higher will be stronger demand for the US Dollar if market sentiment goes south and a premium is put on liquidity over chasing yields. 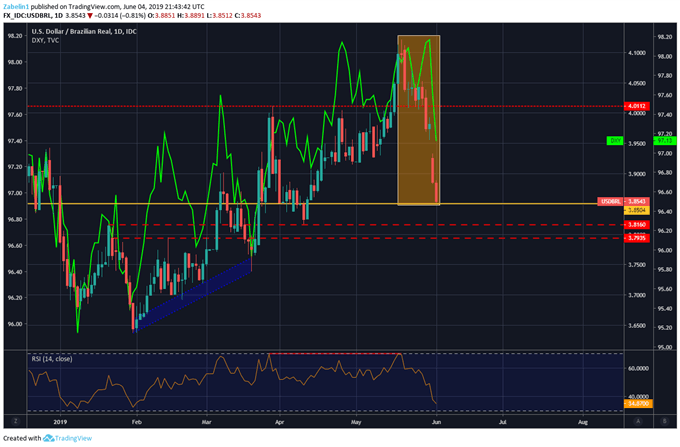 Despite growing concerns about rising tensions in the US-China trade war – which Brazil is carefully trying to navigate– these concerns appear to be a peripheral issue relative to the pension reforms. This may be because the latter has such radical implications for the future of Brazil’s growth prospects. Economy Minister Paulo Guedes has reiterated that unless these pension reforms pass, a recession will return to Brazil – and soon.

This heightened sense of urgency may incentivize local lawmakers to push through the reforms lest their errors become fatal and cost them a reelection. President Jair Bolsonaro sees pension reform passing the lower house of Congress by the end of June, stoking optimism that Brazilian financial markets may find a local boon amid a global slowdown and unsavory geopolitical backdrop.