The Brazilian Real wilted after year-on-year industrial production clocked in at -2.6 percent, undershooting the -1.5 forecast. After the data was released, USD/BRL rose almost one percent and closed higher that day at 3.8142, on the cusp of the 3.8140 resistance. Traders are now eyeing the upcoming year-on-year retail sales data with estimates showing an anticipated rise of 1.0 percent with the previous at 0.6. 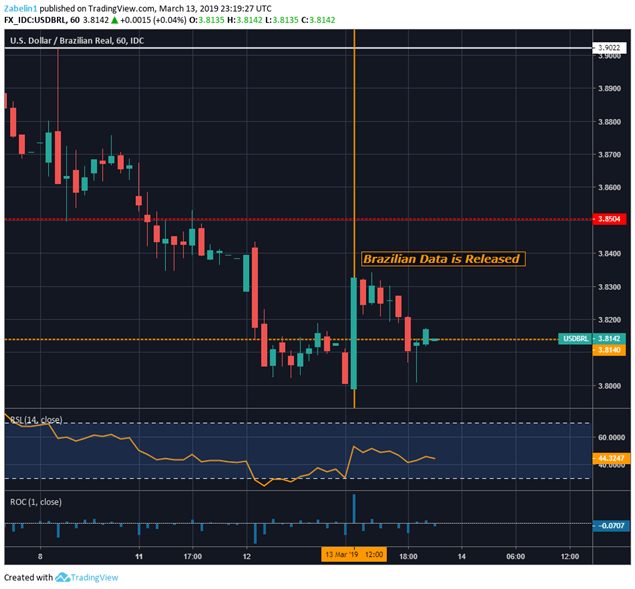 Economic data out of Brazil has been relatively weak as the country continues to struggle with a crippling fiscal deficit of 41.13 billion Reais. President Jair Bolsonaro has put together a bill which seeks to reform the bloated pension system and could see over 1 trillion Reais saved over the course of a decade. The first round of votes on the proposal will be held at the end of May in the lower house of Congress.

In Brazil, the economic docket remains relatively light for the rest of the week so most of the Real’s price movement will likely be influenced by external factors. In the US, initial jobless claims and new homes sales are scheduled to be released which could see the Real fall or rise against the USD depending on the outcome and magnitude of the data.

Other risks from abroad include the Brexit debacle which has caused violent swings in Sterling as the outcome of the EU-UK divorce oscillates between optimistic and bleak. If the outcome results in investors seeking haven demand over yields, emerging market currencies – like the Brazilian Real – may take a hit. This would then only add to the growing list of risk-aversion-inducing triggers that already hang over investor’s minds.