The bounce which began for the Nikkei 225 on March 24 continues, with the bulls now eyeing entry into an important near-term resistance zone on the daily chart.

That range is composed of the previous significant high, March 4’s intraday peak of 21,867.4 and 22,779.4. That latter level could be very significant because its recapture would mean that the bulls had finally clawed back all of the calamitous and swift fall which took the Nikkei down from there to the late December low of 19,012.4. That in turn was the lowest point for the Tokyo blue-chip benchmark since April 2017. 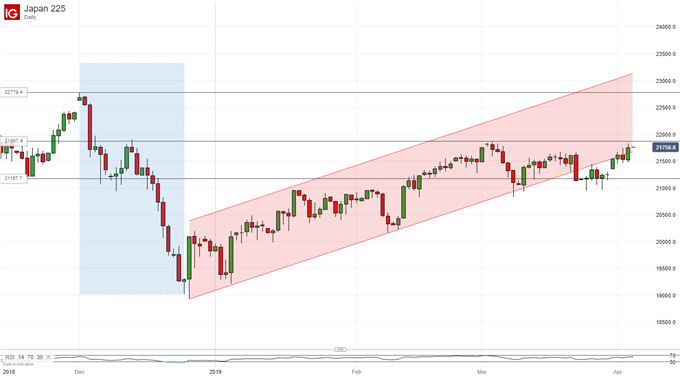 Of course the Nikkei has yet to enter that resistance zone yet, although the signs look quite good at the moment that it will this week. It will need to top 21,867.4 and remain above it to convince though. Every day which passes without the accomplishment of this feat keeps the possibility of a damaging lower low formation alive.

Setbacks will probably find initially support in the 21,588 area where trade coalesced in mid-March. However this level seems unlikely to long withstand any severe bearish test. Below it comes a prop which might, at 21,167.7. That point represents the first, 23.6% Fibonacci retracement of this year’s overall rise.

It has held the most recent bearish forays in check, with the last two daily chart bounces coming in close to that level.

The index is also notably inching back toward that uptrend channel which it abandoned on March 22. It now provides near-term resistance at 21.6743.6.

Whether you are new to trading or an old hand DailyFX has plenty of resources to help you. There is our trading sentiment indicator which shows you live how IG clients are positioned right now. We also hold educational and analytical webinars and offer trading guides, with one specifically aimed at those new to foreign exchange markets. There is also a Bitcoin guide. Be sure to make the most of them all. They were written by our seasoned trading experts and they are all free.