CAD: The Loonie soared following an encouraging set of inflation figures, while the headline figures printed in line with estimates, the Bank of Canada’s preferred measure of inflation jumped to 1.96% from 1.9% which in turn may see the BoC refrain from making a full 180 pivot and keep the option of a rate hike open, albeit, not to take place for some time. In reaction to the CPI report, USDCAD dropped to lows of 1.3270, however, the 1.3250-1.3465 range that has been place for over a month remains in tact for now. Alongside this, the push higher in oil prices also provided underlying support for the Loonie.

NZD: The New Zealand Dollar came under significant selling pressure overnight after Q1 CPI figures disappointed forecasts with the headline reading at 1.5% (Exp. 1.7%). Consequently, money markets priced in greater likelihood that the RBNZ will ease policy at the next meeting (May 8th), jumping to a near 50/50 possibility from 25%. However, NZDUSD soon reclaimed the 0.67 handle with the RBNZ’s Sectoral Factor model showing inflation remained at 1.7%, while encouraging Chinese GDP and production data lifted risk appetite. Nonetheless, with the RBNZ Governor Orr maintaining his easing bias, the risk of a rate cut at the May meeting, could see upside limited, which in turn favours moves higher in AUD and CAD vs NZD.

GBP: Softer than expected CPI data saw the Pound back under pressure with GBPUSD making a move towards 1.30 support. However, given the wind down in Brexit headlines, price action in the Pound has been relatively tame with implied volatility dropping to multi month lows.

Oil: Brent and WTI crude futures continued to march higher as yesterday’s API inventory report showed a surprise 3.1mln barrel drawdown, which in turn sees WTI edging towards $65/bbl. Elsewhere, with the fighting within Libya continuing to escalate, the geopolitical premium continues to keep oil prices supported, while the risk tone had also been improved by China’s encouraging GDP figures for Q1 with signs growing that Q2 may begin to see a rebound in growth. 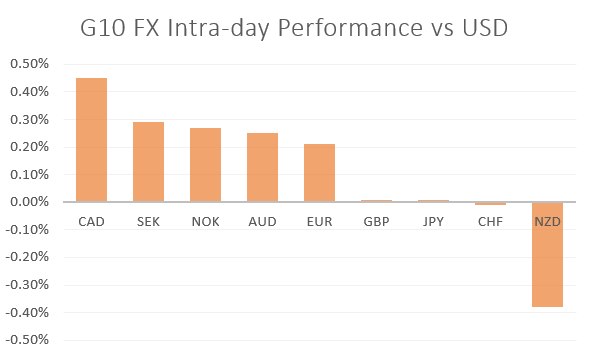