Do you trade on fundamental themes or event risk? See what live events we will cover on DailyFX this week (Friday’s US GDP) as well as our regular webinar series meant to help you hone your trading.

In the rotating fundamental themes looking to hold control over the global markets, the US earnings season is still drawing the greatest attention from the speculative gallery. Heading into Thursday’s New York trading session, expectations were set high. The previous day’s corporate readings presented a mixed picture but seemed to leverage promise where it could spur the most interest. The after-hours Microsoft numbers were strong even looking beyond the typical accounting adjustments made to beat tepid expectations. With the market’s leading sector for speculative charge (tech) supported by this titan’s figures and its worst performing major segment (healthcare) warmed by Anthem (ANTM), there was reasonable anticipation that the session was due a rally – but follow through was open to interpretation as liquidity played out. Indeed, the tech-heavy Nasdaq 100 index took advantage of MSFT’s surge; but an opening bullish gap was all the conviction the market would muster. Sentiment would struggle through the rest of the day. And so, we find our selves facing exactly the same scenario heading into this week’s final trading session. After the New York close this past session, another tech earnings boost was offered by the company that regularly competes for the top spot in market capitalization: Amazon (AMZN). The firm’s earnings per share (EPS) handily beat expectations of $4.76 with a print of $7.09. If we were to follow old logic of risk on supplied by key benchmarks, this would set the terms for a strong conclusion to the week.

Chart of Nasdaq Composite and Amazon in Orange (Daily) 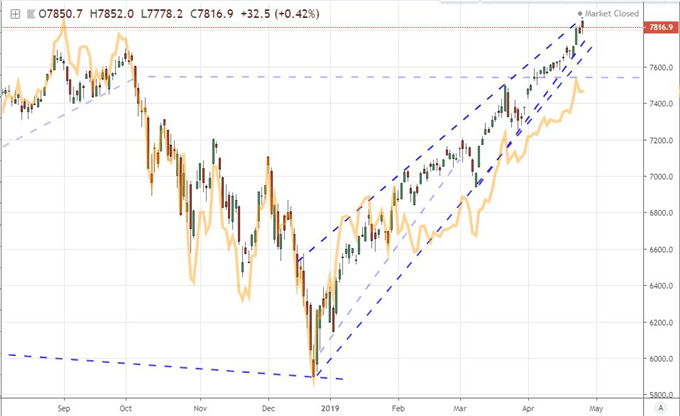 Alas, the default risk appetite reach of past years is no longer our status quo. The flimsy response to the MSFT update is a timely reminder of that reality. However, we can find reason for a default skepticism in the more systemic dislocation of risk performance. When risk trends were barreling higher with little concern as to the motivation, tech maintained the lead with a particularly impressive showing from the FANG – large market cap, tech companies. That same grouping is now flagging the Nasdaq. The index is still leading the broader S&P 500 and blue-chip Dow counterparts, so there is still a speculative appetite at play. That said, the gap between US equities and the many other popular risk-leaning assets has not closed with the many laggards advancing under a halo of optimism. Rest of world equities (VEU) has moved lower this week having failed to pass the mid-point of 2018’s collapse. Riskier assets such as emerging markets and junk bonds are sporting similar discount. The more financially in-tuned carry trade (Yen crosses) never jumped aboard while the more growth-linked sovereign yields and commodities are trading as if it has not decided on a direction at all this year. This lack of consistency shows little genuine sentiment and should raise more concern over the individual outperformers than expectations that the rest of the market is due to follow in US indices’ wake. 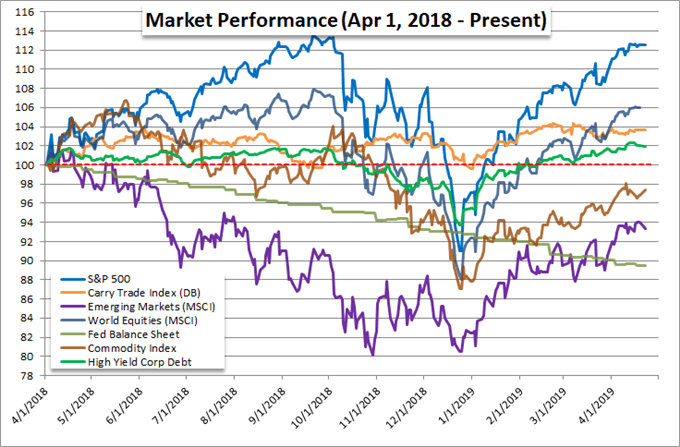 Earnings is a theme that will continue into next week with the release of data from the likes of Google, Apple, General Motors, General Electric and Pfizer. Yet, the number of industry leaders for critical systemic themes is clearly going to recede. That will likely see the attention shift from the corporate earnings perspective of fundamental themes to the themes themselves. Traders should be mindful of the other thematic issues that are presently in the backdrop but which could readily come to the foreground with the proper spark – or even the recession of the other key matters. For the general concern over growth (more accurately fears of stalled expansion or outright recession on a global basis), the world’s largest economy is due to print its own 1Q GDP figure in the upcoming session. In the meantime, we have seen steep downgrades to the global growth forecast from the IMF and the WTO. More recent, South Korea – the world’s 12th largest economy (according to the IMF’s figures) and the fourth largest Asian economy – reported a -0.3 percent contraction this past quarter. That was the worst showing for this important economy since the Great Financial Crisis a decade ago. Perhaps even more troubling, capital expenditures collapsed -10.8 percent for the biggest contraction since the Asian Financial Crisis in 1998. 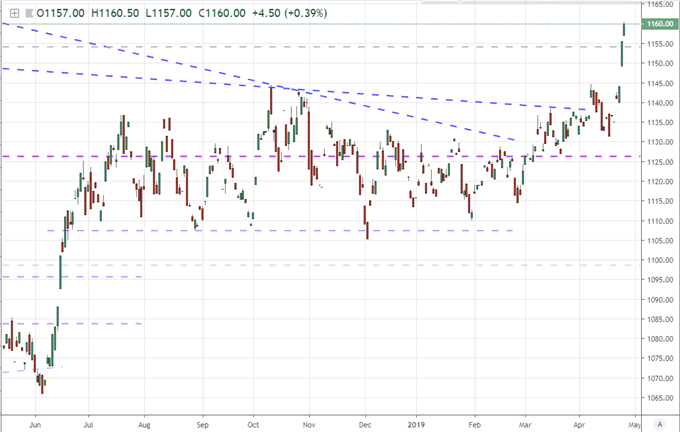 Growth isn’t the only fundamental theme rotating back into the headlines and through market influence. Monetary policy is another matter of substance. The Bank of Japan (BOJ) raised few eyebrows with its monetary policy update Thursday morning, but market participants keeping tabs on the balance influence in the financial system would notice the subtle measure of desperation from a group that is losing its ability to extinguish financial fires. While Governor Kuroda didn’t change the benchmark rate or the terms of the bank’s open-ended stimulus program, he would offer up a tangible time frame on the extremely low interest rates. While he wouldn’t offer a limit on the near-zero rates, he did say they would remain in place at least another year. We’ll see what the Federal Reserve and Bank of England will answer with through their own updates next week. As for trade wars, Japanese leaders continued their week-long visit through Europe and North America. The hosts of the next G-20 summit are making a valiant – but ultimately impotent – effort to encourage global trade during an unmistakable trade war. Japanese Prime Minister Abe is due to meet US President Trump Friday. Speaking of the US, the country’s Trade Representative office announced China’s third largest e-commerce company Pinduoduo.com would be added to the blacklist for intellectual property theft. That seems to contradict the sentiment implied by remarks by Trump that Chinese President Xi will visit soon – presumably to sign a trade agreement.

US 1Q GDP Tops the Economic Docket but Will the Dollar Look Up?

If you are looking for significant market movement among major currencies, the most targeted potential rest with the US Dollar and the release of the 1Q US GDP update. There has been an unmistakable concern over the health of the global economy to the point that fears of recession has readily followed tentative signals such as the US yield curve inversion. Naturally, the health of the world’s largest economy will have carry through for the rest of the globe. The forecast for a 2.2 percent unchanged pace this past quarter from 4Q is a neutral benchmark that can stage a market response should the official report best or disappoint the outlook. The wider the divergence of the official growth update to the consensus forecast, the more significant the market response. That said, will the Dollar establish its next move on the basis of this data…on a Friday? Will global markets and sentiment itself take its cues from this figure? For the Greenback, local data has played little role in directing speculative intent. More influential for the Greenback seems the collective improvement, deterioration or inconsistency of major counterparts. Recently, retreat from the Euro, Pound, Yen and Aussie Dollar at the same time earned the DXY Dollar Index (trade-weighted) and my own equally-weighted measure a break to near two-year highs. That was an effective technical spark, but can it earn a sustained burn? 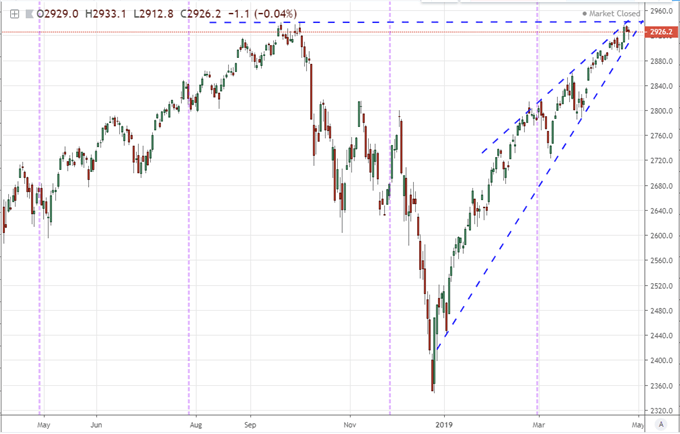 Looking to the other major currencies, we are starting to see the limitations of local fundamental motivation shift out to the future. For the Euro – the second most liquid currency – an equally-weighted measure notably broke lower this past session. There was little in the way of scheduled event risk that could be expected to move the shared currency Thursday and Friday is no different. Looking ahead to the next week, we have the Spanish election and Euro-area 1Q GDP readings on tap, but that is a matter for the week ahead. From the Pound, Brexit is still a hitch but we have released the potency with the next deadline pushed out to to May 22nd (the date by which the UK must signal its intent to participate in the EU Parliamentary election). Cable (GBPUSD) slide further this past session, but the Pound contributed little to this effort. Even the Japanese Yen offered little support to the Dollar’s efforts considering USDJPY actually dropped. The BOJ’s dovish bearings and the Japanese delegations remarks in the West spurred little commitment from the Yen. We should weigh this against traditional risk intent moving forward. We discuss risk trends, systemic themes, the majors and more in today’s Trading Video. 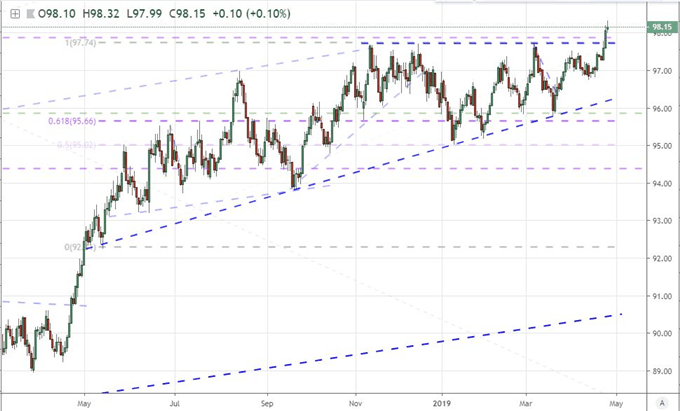