Regional markets were unable to capitalize on a positive lead from Wall Street, a move driven by hopeful developments on US auto tariff prospects and the USMCA trade pact. That’s after President Trump issued an executive order seemingly intended to punish Chinese telecoms like Huawei and ZTE Corp.

Markets appeared to read this as likely to complicate already frayed relationsbetween the world’s top-two economies, lowering the probability that the situation might get better before it gets worse. That has set an ominous for the remainder of the trading day.

Besides the Yen, the US Dollar may be well-supported if another wave of divestment across the risky asset universe puts a premium on the benchmark unit’s unrivaled liquidity. That has kept it impressively well-supported even as Fed rate hike bets have evaporated since late last year.

CHART OF THE DAY – WHO WILL BLINK FIRST AS US-CHINA TRADE WAR ESCALATES? 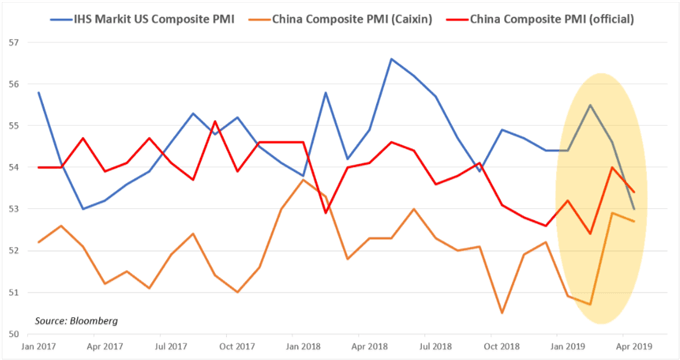 An oft-repeated sentiment among financial market participants is that the US economy is in a better position to withstand a prolonged trade war with China than the alternative. PMI survey data – a timely proxy for GDP growth – hints this may be somewhat misguided.

Since February, the data shows that US factory- and service-sector activity growth has slowed even as analogous measures tracking China have rebounded. This shows up in the government’s PMI statistics as well as the private-sector Caixin data series.

This comes at a time when Washington has escalated pressure on Beijing by increasing tariffs on $200 billion in Chinese imports from 10 to 25 percent. The Trump administration has also threatened to apply the higher levy to a further $300 billion in goods if a deal is not struck within a month.

At surface level, such actions seem to imply that the US sees itself in a position to force an agreement, presumably because it is better able to weather through a mutually damaging escalation. PMI figures warn this may be a miscalculation however, prolonging the spat and stoking longer-lasting risk aversion