Whilst job creation is expected to confirm a disappointing outlook for the economy, unemployment figures are expected to remain stable at 5.8% after they saw an increase in January, from 5.6% in December.

USDCAD and GBPCAD are currently seeing little momentum as traders wait for the data to be released. A weaker tone for oil prices as worse than expected Chinese trade data renews concerns over economic slowdown, meant that the small corrective rebound attempted yesterday by the Canadian dollar has been halted, with a further losses likely if data disappoints.

The Canadian Dollar was sent crumbling on Wednesday against major currencies like the GBP and the USD after the Bank of Canada seemed to push back their intended rate hikes after acknowledging that domestic and global economies are weakening and there is a fresh fear of recession. The fall in CAD may continue through the Friday session as the USDCAD could test the 1.3500 line heading up towards the 1.3570 supply zone. The possible increase of the pair will also be pulled by an expected net gain in US non-farm jobs in February, with the figure expected to come in at just under 200k new job creations.

Recent Canadian macroeconomic figures have shown cause for concern as Q4 GDP grew by only 0.1% after having two consecutive months of a 0.1% contraction at the end of 2018. On top of that, oil prices have been very unstable in recent months. During the last quarter of 2018 they experienced losses of up to 30%, which took its toll on the Canadian dollar, before they rebounded and rose up to 20% at the beginning of 2019. 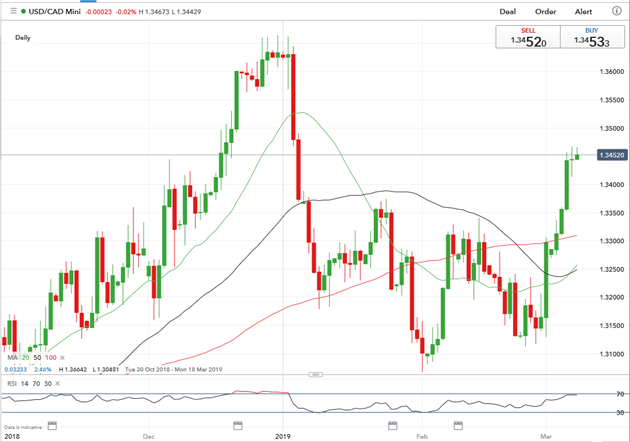 Forces Behind the Canadian Dollar (CAD)

The Canadian Dollar is highly exposed to commodity prices as it is a major exporter of petroleum and minerals. Trade flows from these exports can shape an investor’s view on the Canadian Dollar. Oil is the largest single contributor of foreign exchange to Canada, meaning that a change in oil prices will shape its exchange against other major currency pairs. Changes in oil prices are known to have a big effect on the USDCAD currency pair, when oil prices rise so does the value of the Canadian Dollar, which lowers the currency pairs’ exchange rate. The fundamental relationship can be attributed to the fact that Canada earns most of its US Dollars from the sale of crude oil to the US, which has a big impact on its domestic economy.

The Canadian Dollar is also exposed to events that affect the USD as their proximity makes them each other’s biggest exporters/importers. CAD traders will closely watch events in the United States as they will most likely spill over to the Canadian Dollar. The recent trade wars between China and the US have had a big impact on the CAD. Uncertainties about the future of trade will have a big impact on commodity-based currencies like the Canadian Dollar, as investors will reduce their exposure to avoid loosing value if trade conditions worsen.