The Canadian Dollar brushed aside solid local retail sales data, underperforming against most of its major counterparts on Wednesday. Excluding automotive, companies sold 1.7% more m/m in March versus 0.9% expected and from 0.7% in February. That was the highest since May 2018, but once you accounted for autos, those only rose 1.1% versus 1.2% anticipated. Bank of Canada rate cut bets actually increased by day-end.

Moreover, the Loonie was focused on what was going on with the decline in crude oil prices. It began with a downturn in sentiment during European hours as equities fell. The commodity brushed aside a drop in Russian oil output, which highlights its vulnerability to a decline in stocks due to its sentiment-linked vulnerability. The commodity did also accelerate its decline when US weekly oil inventories increased. 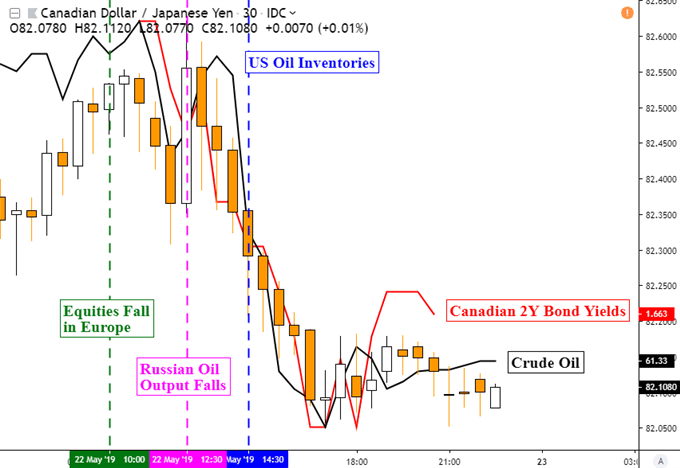 USD/CAD finds itself wedged between support at 1.3390 and resistance just under 1.3445. The pair struggled to breakout to the upside over the past three weeks when looking at its performance around the peaks in March. A break under support exposes what could be a rising channel of support from February lows. 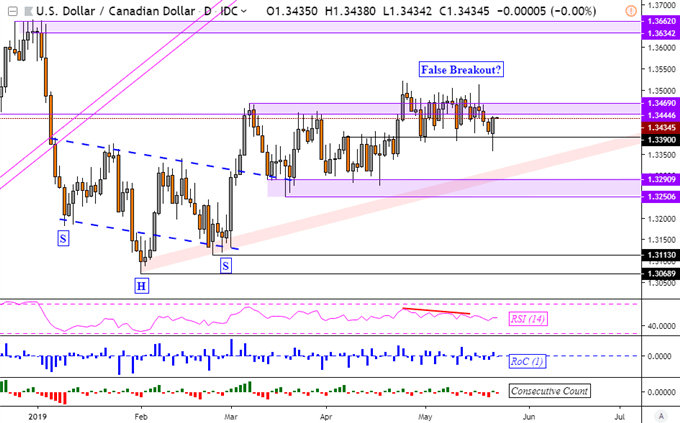 British Pound, Brexit, FOMC Minutes and the US Dollar

The British Pound continued to depreciate across the board in its prolonged decline since earlier this month over the future of Brexit. Over the past 24 hours, UK Prime Minister Theresa May came under increasingly more pressure to step down which risks throwing another curveball at EU-UK divorce negotiations. Meanwhile, the US Dollar traded sideways as the FOMC minutes stressed the importance of local data.

S&P 500 futures are pointing narrowly lower heading into Thursday’s session following a disappointing day on Wall Street. Overnight, the US weighed blacklisting Chinese surveillance firms such as Megvii and Meiya Pico. If this risks escalating US-China trade wars after talks have reportedly been stalling, equities could be vulnerable with the anti-risk Japanese Yen in a potentially good spot to benefit from.