MXN, CAD May Gap Higher as US Drops Mexican Tariffs

The Mexican Peso and Canadian Dollar may gap and appreciate against their peers at the beginning of the new week. After market close on Friday, US President Donald Trump announced that the nation will “indefinitely suspend” tariffs scheduled for Mexico. Though significant follow-through could be lacking as this wouldn’t be too surprising.

Heading into Friday’s close, Mr Trump said that there was a “good chance” that the US would make a deal with Mexico. Thus, the surprise effect has arguably lost some of its potency given that equities rallied into the week-end. For the Canadian Dollar, the cloud of uncertainty surrounding the passage of the USMCA, the replacement to NAFTA, is arguably lifted somewhat and thus should offer the currency a boost.

For equities, the outlook is not quite as clear heading into Asia markets. While the removal of US-Mexico trade war fears is an upside potential, it also alleviates pressure the Fed is facing on the external front and may cool rate cut bets. Granted, there is still the threat of additional tariffs on China. It would not be too surprising to see North American confidence-inspiring market sentiment to perhaps alleviate declines seen in the US Dollar as of late. The anti-risk Japanese Yen may weaken ahead.

Speaking of, the US Dollar rounded out its worst week since February 2018 on Friday, with the DXY plunging in the aftermath of a softer-than-expected local jobs report. In May, the US only added 75k positions compared to 175k expected as overall average hourly earnings fell short of estimates. Meanwhile, unemployment held steady at 3.6 percent as anticipated. The labor force participation rate also remained unchanged.

On the flip side of the spectrum, the Canadian Dollar outperformed amidst a rosier employment report. In May, Canada added 27.7k jobs versus 5.0k anticipated. Meanwhile, the unemployment rate ticked lower from 5.7 percent to 5.4. However, the labor force participation rate declined from 65.9 percent to 65.7 unexpectedly. Still, local 2-year government bond yields rallied as BoC rate cut bets cooled.

With that in mind, gains in the Loonie could be challenged by those seen in the US Dollar ahead. This comes as USD/CAD sits in a key support range between 1.3251 and 1.3291 after clearing rising support from February. If this area is taken out, we could be looking at testing lows not seen since March as the near-term downtrend extends. 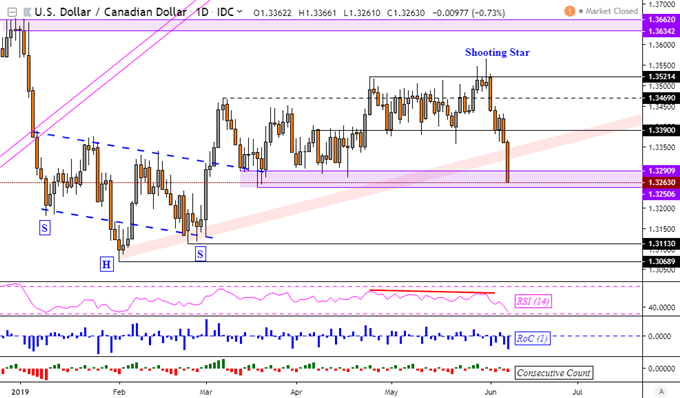