CAD: The Loonie soared after a blowout jobs report, which saw the headline figure post its largest gain on record at 106.5k, expectations had been for a modest 10k increase. Alongside this, the unemployment rate dropped to 5.7%, below consensus for 5.8%, while the wage component had yet again shown another increase at 2.6%. Overall, a strong jobs report, consequently, USDCAD dropped from 1.3470 to 1.3390. (Technical Analysis)

USD: The US Dollar is on the defensive against G10 currencies. Softer US inflation had dented some demand for the greenback with the headline and core (m/m) figures missing analyst expectations. Alongside this, the modest pick-up in risk appetite, despite the tariff hike has also benefitted the dollars major counterparts.

On the trade war front, talks between the US and China will continue today, however, given that the Trump administration has hiked tariffs, chances of an agreement to be announced today is very slim with Trump also tweeting that there is “no rush” to reach a deal. As such, it is perhaps more likely that both the US and China will agree to continue negotiating in order to eventually reach an agreement.

GBP: UK GDP matched analyst estimates with the quarterly rate rising 0.5%, which in turn took the yearly rate to 1.8%. However, the reaction in the Pound was unmoved with much of the focus for Sterling traders on UK politics. Cross party talks continue, however, as it stands a breakthrough between both parties is doubtful, as such, this keeps GBP upside limited for now. Alongside this, growing calls to oust PM May is likely to see GBP on the defensive if the likelihood increases.

Crude Oil: As the risk appetite improves slightly, oil prices have edged higher with Brent reclaiming $70/bbl. However, what has been more eye catching has been the backwardation in the futures curve, which has steepened to the highest level in over a year. Subsequently, this implies that investors remain optimistic over the future prospects for Brent crude. 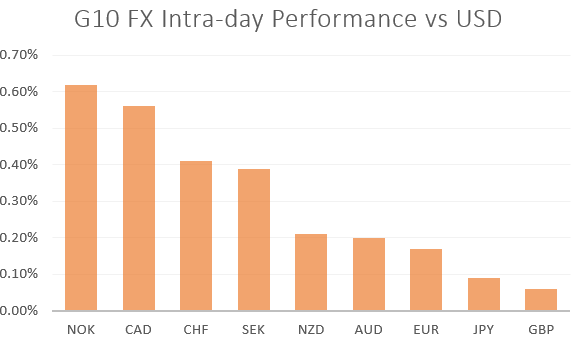