The Bank of Canada just announced that it will leave its policy interest rate unchanged at 1.75 percent as expected. However, the Canadian Dollar is coming under pressure due to dovish language found in the accompanying press release. 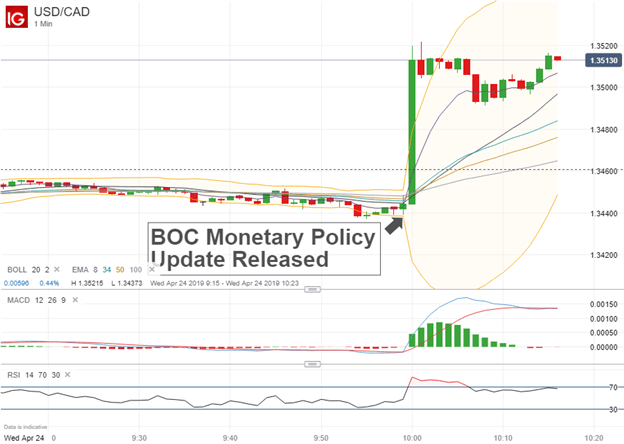 Ongoing risks to global trade relations dragg down business sentiment and activity were echoed again. This was previously mentioned by the BOC in its Business Outlook Survey Indicator released last week which fell to its lowest level since 3Q 2016.

Take a look at this article covering Canadian Dollar Technical Outlook for USDCAD, CADJPY, and GBPCAD.

On a brighter note, Poloz stated earlier this month that Canada’s exports were showing signs of strength, particularly in the service sectors which employs roughly 80 percent of Canadians. Moreover, oil prices have climbed nearly 20 percent since the BOC’s last monetary policy update which looks to bolster Canada’s economy due to its large reliance on energy.

The central bank expects growth to rebound in the second quarter this year and projects real GDP growth of 1.2 percent. The BOC said that it will closely watch developments across household spending, oil markets and global trade policy to guide its monetary policy decisions. The Bank of Canada’s next monetary policy update is scheduled for May 29.