While there were a few high-profile examples of volatility this past week, it would be more than a stretch to say that there are any systemic trends underway across the financial system at present. Taking stock of the resting pulse of the market is important for successful navigation. For example, we wouldn’t want to keep positioning for breakouts when there is evidence to suggest that such moves inevitably fail and revert to range – as seems to be the case for the markets at present. It is this default that we should consider before are seduced by loaded technical developments and/or we raise expectations for scheduled event risk to justify an appetite for more profitable swings in assets. Sorting this hierarchy would certainly help with setting expectations for the S&P 500 and US crude oil this past week as the former advanced above 2,820 on Friday and the latter broke 57.80 mid-week. The technical cues were overt enough and there are certainly themes or scheduled events that we could point to in order to foster expectations for follow through. Yet, neither has shown the kind of enthusiasm we would expect to fuel a meaningful trend.

There is always a healthy run of scheduled event risk to spark volatility each week – and indeed there is plenty on tap for the week ahead – but a fundamental transition to trend will more likely arise through a critical theme. There remain three such broad considerations that seem to carry the attention of the global markets. Trade wars seem to still carry much of the unrequited optimism that a recovery rally can restore the high set last year. China’s National People’s Congress ended with a ceremonial endorsement of a law aimed at addressing foreign businesses concerns such as intellectual property theft, but there is little confidence that it will answer the systemic problems. At the same time, President Trump’s warning that the US could walk away from negotiations and his clear threat that tariffs could be raised against the EU should they not offer favorable dealings.

On the foundation of economic activity, the unflattering updates from the fourth quarter and previous few months are fresh in mind. Thus far, the optimism of the US government and tax cut vows by the Chinese government have yet to translate into investor traction. We will see if this week’s global PMI figures for March tip the scales either way. Without doubt, the most prominent theme ahead will be monetary policy. While the range of rate decisions from the US, UK, Switzerland, Brazil and Russia have their own implications for local markets and currencies; the overt dependency of risk trends on central bank backstop should have market participants attentive…and perhaps worried. 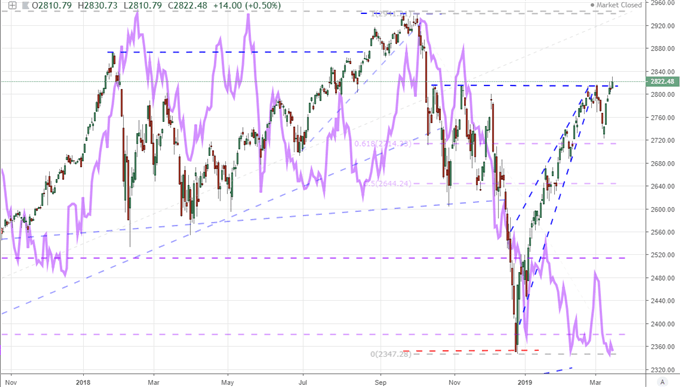 There are two regions/currencies in particular this week that are facing heavy scheduled event risk that will tap into deeper fundamental veins. The Sterling is due yet another week that will host a critical Brexit update. In fact, the UK docket is fairly crowded with data and events that are remarkable in their own right. The most recent employment statistics and inflation updates are bygone market movers, but are unlikely to take the yoke this week. Even the Bank of England (BOE) rate decision will give way unless the MPC surprises with an actual change to policy or offers a more dramatic shift to forward guidance. With the official Brexit date still set to March 29th, there is still a vastly more important consideration for those investing in the UK or trading its currency. After a marathon series of votes this past week, Parliament decided on a course prompting the Prime Minister to request a delay to the Article 50 date. Before that moves forward, though, it seems were due yet another day in the Commons on another meaningful vote (MV3). Theresa May will put her proposal up once again, hopeful that the prospect of no Brexit at all could prompt hold outs from her party to come around. If that happens, an extension to June has been floated; but if rejected once again, it is unclear how long the request will be and whether it will do any good.

Short of a vote that backs MV3 and sends GBPUSD sprinting above 1.3400 or EURGBP tumbling below 0.8450, it is hard to imagine the Sterling committing whole-heartedly to a trend this week. The Dollar, on the other hand, is not so convoluted. The Greenback has held remarkably firm against trends that question its carry status, undermine its haven capacity, hobble its growth forecast yet hold out through its capacity as an alternative to otherwise troubled currencies. There are a few indicators of merit for the Greenback to entertain ahead, but it is Wednesday’s FOMC (Federal Open Market Committee) rate decision that clearly stands out. The probability of a move at this meeting is very very low – a 1.3 percent chance of a 25 basis point cut.

That said, we are just coming off a 225 bp run of rate hikes over three years, the Fed has made a clear transition in intent and the markets are pricing in a 28 percent probability of a cut by year’s end according to Fed Funds futures. That puts considerable emphasis on the details from this update. In particular, traders will be watching to see if the group makes official its suggested plans to throttle is quantitative tightening effort (reduction in its massive balance sheet). If they do, that would be a significant cap in longer-dated rates which would be aimed at growth but which would also cut US carry appeal and raise questions over the health of the economy and outlook for local assets. Keep an eye on the EURUSD’s remarkably tight range during these developments. 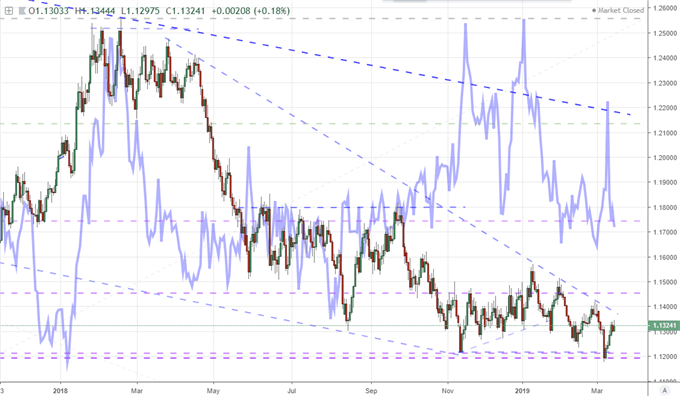 While Brexit offers the most direct path to the Sterling and the Fed rate decision is an obvious catalyst for the Dollar, don’t underestimate the heavy implications this carries for the next most liquid currency in the FX market: the Euro. The UK’s divorce from the EU carries just as much fundamental weigh for the European conglomerate in growth terms, financial participant and of course the existential risk that other countries may follow in its wake. The Fed decision is another event that will raise the profile of the Euro as it draws attention to the ECB which has taken a noticeably dovish course change with its reintroduction of the TLTRO programs. These factors will likely prove more productive for the shared currency than domestic indicators such as the ZEW investor sentiment surveys, ECB economic bulletin and Eurozone PMIs for March. As for the EU Summit, it will be difficult to draw attention away from the Brexit.

Sometimes getting away from high-level and abstract influences is a benefit. Without a higher fundamental authority to answer to, markets can respond more freely to discrete fundamental event risk. We will see if that is the case for the Swiss Franc and New Zealand Dollar this week. The Franc has found very little movement of its own which has made for interesting trading patterns for USDCHF and EURCHF. The SNB (Swiss National Bank) rate decision is unlikely to change that fact unless the group lashes out in desperation. If they stay the course, it will only add slowly to the understanding that central banks are running out of resources to affect change. The New Zealand 4Q GDP update on the other hand is not so esoteric. A clearly strong or weak showing from that report could rouse the Kiwi Dollar to a clear response. Whether or not any moves will be hearty enough to drive NZDUSD or an equally-weighted Kiwi index from its wedge is a matter that should be watched closely.

As for the commodity market, my interests are more as barometer for the broader financial system and growth than individual trade vehicles. Crude oil managed to overtake 57.80 after weeks of obeying its technical influence. The natural assumption is that there would be a rush of speculative bids following the break, but that quite clearly did not materialize. The question here is what would motivate follow through in a meaningful way, and the answer would most likely be the forecast for economic activity. Therein lies a serious restriction for risk appetite. Gold on the other hand maintains a positive correlation to the deluded S&P 500 as well as the astray safe haven US Dollar. This points to something fundamentally unsound to the conviction in trends we have seen dominate the landscape these past six months. We discuss all of this and more for next week’s trading in this weekend Trading Video. 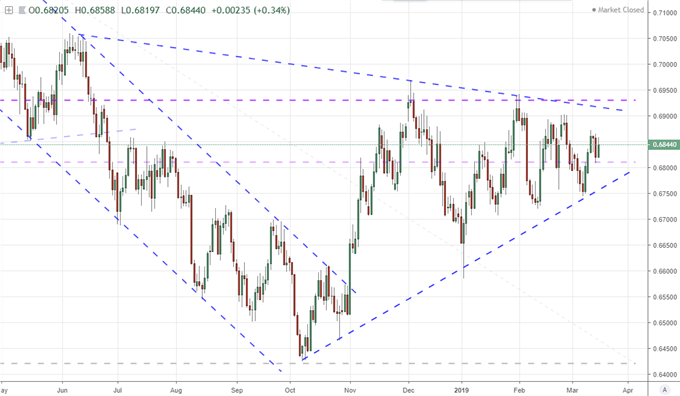