Over a 24-hour period on May 7/8, I asked my Twitter followers again to choose between the bookies’ four leading candidates to succeed UK Prime Minister Theresa May, questioning which of them would be most positive for Sterling. May is coming under ever-increasing pressure to set a leaving date and it has been reported that Members of Parliament from her ruling Conservative Party are demanding a firm timetable for her departure. So far, she has rejected calls for her to quit.

That follows repeated delays to Brexit, large losses for the Conservatives in local elections and the prospect of the UK having to take part in European Parliament elections on May 23.

Against this background, the bookies continue to take bets on her successor and these four were their favorites at the time:

There were 160 votes in total, with most of the voters likely to be in the financial markets as they follow me or one of my DailyFX colleagues on Twitter, and top of the poll was Corbyn, just ahead of Johnson, who is often portrayed as a popular but controversial politician and who resigned from the government in criticism of May’s approach to Brexit.

When my last Twitter poll asking the same question was conducted almost three months ago, Johnson led the field but this time he was nudged into second place by Corbyn even though the Labour leader is regarded as being on the left-wing of his party. The full results were as follows: 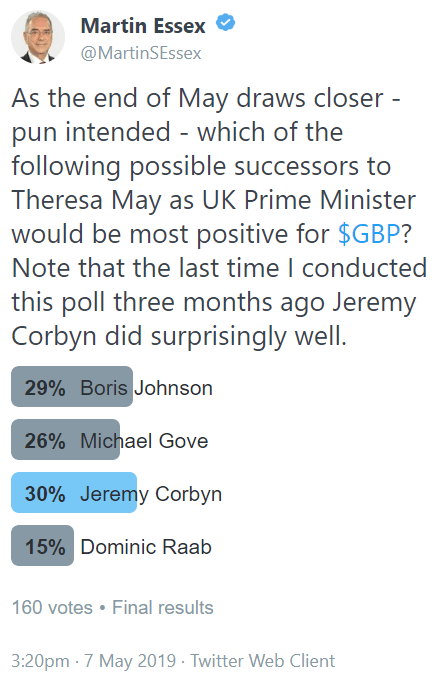 In London Thursday, GBPUSD was holding close to the 1.30 level after three days of losses on reports that the Brexit talks between the Conservatives and Labour are close to collapse. 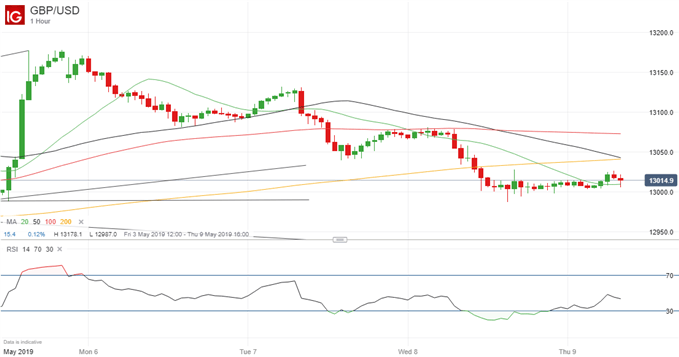 Source: IG (You can click on it for a larger image)

More resources to help you trade the forex markets: