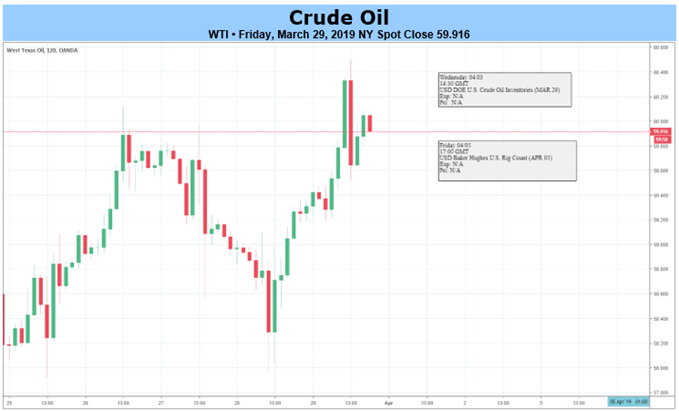 Looking for a technical perspective on Crude Oil? Check out the Weekly Crude Oil Technical Forecast.

Crude oil prices head into a new week still very much within the uptrend on their daily chart which has endured since the lows of last December.

To be sure clear uncertainties still glower over likely global economic growth. Data from all key regions has disappointed of late, with last week’s softer US growth numbers only adding to the sense of deepening malaise.

Of course, a feeble global economy will lead inevitably to reduced oil demand, so it’s reasonable to assume that the current up-move remains rooted in expectations of reduced supply. After all, oil prices are now about 30% above their 2018 lows supported by output cuts from the Organization of Petroleum Exporting Countries and other major players, along with US sanctions on Venezuela and Iran.

US President Donald Trump last week called on OPEC to ‘increase the flow of oil.’ He seems to have done so in less bellicose terms than those in which he has previously couched similar entreaties, this time noting fragile global markets.

This week will bring news of Chinese economic performance in the form of official and private Purchasing Managers Index surveys, with the country’s manufacturing sectors expected to keep contracting, as it has for three straight months already. The markets will also get a look at Japanese business confidence in the bellwether Tankan survey due for release on Monday. Official US labor statistics will round out the week’s numbers.

Given recent data disappointments there would seem to potential risks for oil prices in all this data. Moreover, the crude oil spot market is also edging up toward overbought levels judging by momentum indicators such as its Relative Strength Index. It could be due a rest.

The main risk to current, bearish fundamentals is potential good news on the trade front from talks between China and the US. News of any settlement will probably see all growth-linked markets get a substantial fillip, probably including that for crude. There’ve been encouraging noises from both parties on this score of late, but the coming week may be too early for definitive progress.

With that in mind it’s a neutral call.