Crude oil tanked over 3 percent to its lowest level since April 5 amid renewed criticism from US President Trump over OPEC and global oil supply. Trump’s latest jab at the largest group of oil producing countries is not is his first attempt to put pressure on the petroleum cartel to raise crude output. In fact, Trump’s oil tweet a month ago also sent prices swinging lower when he said it is “very important that OPEC increase the flow of oil.” 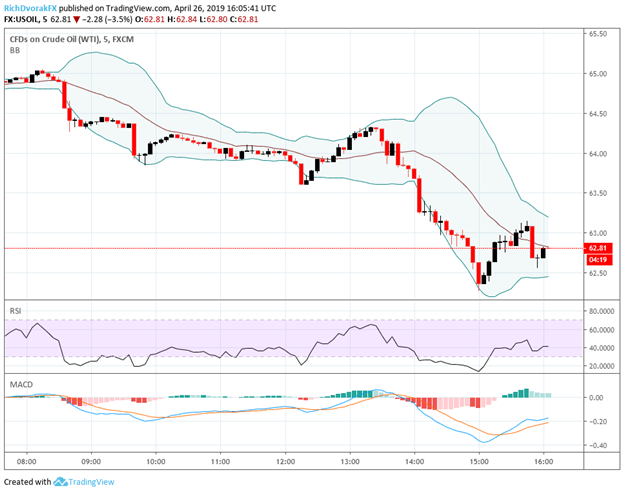 Prior to today’s slide lower, markets witnessed a 55 percent surge in oil since the start of the year. The move higher was primarily driven by pledges from OPEC to cut oil production and restore supply and demand imbalances in response to slowing global growth.

Turmoil in Libya and Venezuela as well as the expiration of exemptions to Iranian sanctions have all likely exacerbated the move higher in oil prices. Now, fears are starting to build that the steep ascent in oil prices over the last 4 months could begin to drag economic growth lower. This could be the result of higher oil prices translating into rising input costs on firms and eventually consumers.

The dramatic move in oil today is a bit surprising on the surface, however, considering the massive US Q1 GDP beat. The US economy expanded 3.2 percent in the first quarter which blew past Bloomberg’s median consensus of 2.2 percent. Initially, one might expect the news of higher economic growth to boost the case for rebounding global GDP, leading to a similar rise in demand for oil and thus oil prices.

Although, when ‘looking under the hood’ of the US GDP report, the details appear to be bleaker than the 3.2 percent headline number reported. The better than expected US GDP number was largely driven by a hefty build in inventories, a reduction in imports in addition to higher state and local government outlays – components that generally do not warrant a celebration.

This is also indicated by the lack of conviction in the equity markets and skepticism in the bond markets with the S&P500 only up a mere 0.3 percent after opening up in the red and the US10YR Treasury yield dropping to 2.5 percent.

If markets remain unconvinced that economic fundamentals are turning higher – which appears to only be occurring in the United States while the rest of the world continues to struggle – resurfacing global growth slowdown fears could drag oil prices lower. Furthermore, the downside risk of another Trump tweet at OPEC always remains a possibility.