Crude oil prices started off the week on a high note after reports crossed the wires that the US is going to end Iran sanction waivers for imports of the commodity come May 2. This created supply disruption concerns which bolstered petroleum prices. The sentiment-linked commodity then started losing upside momentum on overall mixed US earnings, particularly from industrials as 3M Company announced job cuts.

By Friday, oil suffered its worst week in two months as US President Donald Trump took another jab at OPEC’s efforts to uphold prices. This also followed a mixed US GDP report. The 3.2% q/q growth in the first quarter was undermined by weakness in personal consumption which is the largest portion of GDP (almost 70%). Moreover, volatile inventories and trade contributed to most of the sunny surprise.

Oil Week Ahead, The Fed

Pro-risk crude oil prices have the upcoming Fed rate decision to look to for direction. Fed funds futures are showing a roughly 66% probability that the central bank may cut once by the end of this year. This means that with each passing monetary policy announcement that the Federal Reserve does not support expectations of an impending rate cut, risk-leveraging dovish bets could falter and send assets tied to speculative sentiment, like equities, tumbling.

This is a clear downside vulnerability for the commodity because of how closely it has been following the S&P 500 since bottoming in late December. Fed Chair Jerome Powell stressed on multiple occasions that they are closely watching external risks such as a European slowdown and Brexit. On top of this, he added that ‘rates are in a right place’. In short, the risks for crude oil and equities seem tilted to the downside.

In the context of their data-dependent approach and last week’s first quarter GDP report, the week ahead contains a plethora of domestic economic statistics. We have the core PCEdeflator (the central bank’s favored measure of inflation), consumer confidence, ISM manufacturing and a jobs report. These can impact the US Dollar and thus crude oil prices since the latter is typically priced in the former. 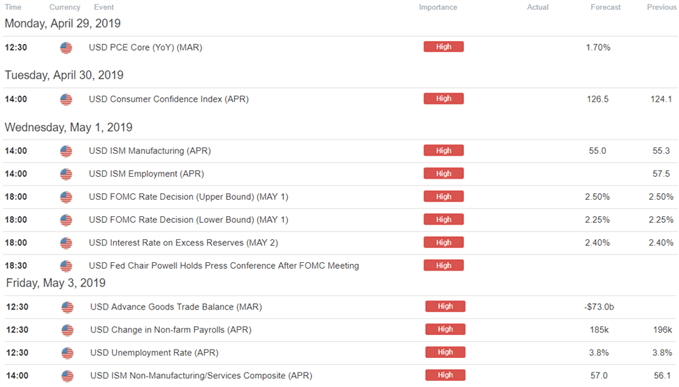 *All times listed in GMT

On the chart below, the Citi Surprise Economic Index still shows that data outcomes have tended to disappoint relative to expectations. Despite increasingly softer-than-expected economic results, the S&P 500 continued rising along with the commodity as markets focused on a more dovish Fed. Though, last week we did start seeing a divergence between the two.

The Citi index hints that economists may be overestimating the health and vigor of the economy, opening the door to further disappointing outcomes. The counterargument is that it could further fuel Fed rate cut bets, but last Friday showed a lackluster response. It may come down to what Jerome Powell has to say on Wednesday which just leaves the jobs report on the docket afterwards. 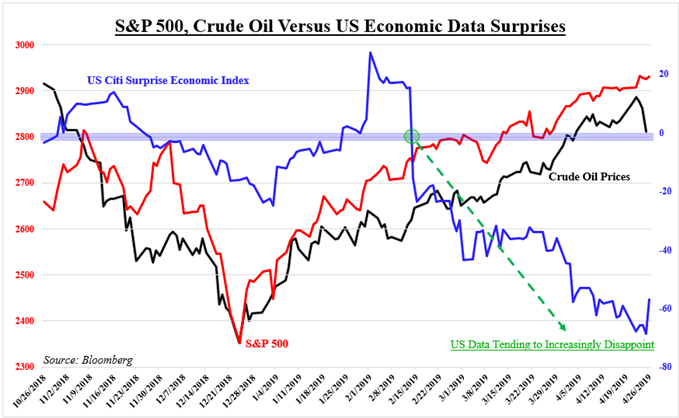 With that in mind, the density of the US economic calendar and the prominence of monetary policy may put OPEC output fundamentals on the sidelines. Chinese petroleum consumption shifting away from Iran and towards Saudi Arabia may also cool concerns about the impact of the US discontinuing sanction waivers. Trade negotiations between the US and Japan are another wildcard for market mood.