You are in luck, DailyFX’s Q1 2019 Crude Oil Forecast was just released

Looking for a fundamental perspective on Crude oil? Check out the Weekly Crude Oil Fundamental Forecast.

Confidence appears to be returning to the crude oil market after a disastrous Q4. This week, news hit that Chevron and Exxon Mobil plan to sharply increase their oil production in the world’s largest shale basin over the next five years with Exxon Mobil noting the best environment since their merger in 1999.

Crude bears are likely pointing to a worrying rise in stockpiles, but seasonally, that is to be expected, and despite the U.S. inventories increasing by 7.1 million barrels last week, the EIA data still showed reasons for the bulls to be optimistic.

First, demand was quite apparent despite the build with an evident decline in gasoline, distillate, and propane and overall stockpiles fell to the lowest levels since December. Crude oil continues to trade below the year-to-date high of $57.88 that was traded at on March 1, but the price for most of the week has traded within the March 1st range signaling a potential sideways correction before a possible trend resumption.

Friday saw a bout of selling across risky assets that was cemented by a disastrous US payroll and from a week where a combination of central banks including the Bank of Canada and the European Central Bank reduced their expectations for inflation and growth. Adding to this, Chinese trade data showed a three-year low in exports though traders are going to need more before they turn their bank on the rally that began in early 2019. 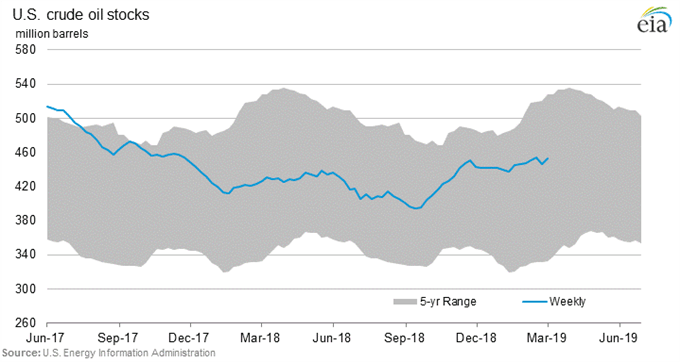 Supply has been a bit of a confusing story on a global scale as OPEC and their allies (collectively known as OPEC+) have reduced supply to a four-year low, US production remains robust. the chart above shows current US crude stockpiles in relation to the five-year range. We could continue to push toward the top of the range given the growth expected to continue in the Permian basin while bears will continue to await the dire outlook from the OECD who cut their outlook for global growth again amid trade tensions and political uncertainty.

Potential Fly in the Bull’s Ointment? 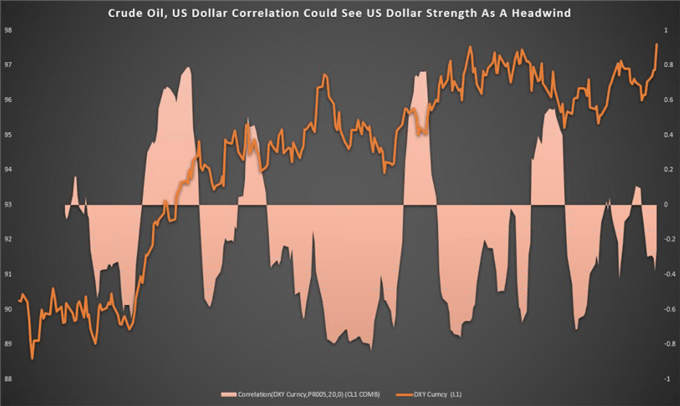 The US Dollar looks to be a problem that could limit the gains for crude oil if nothing else can stop its gains or, at least, lack of downside. A close second would be a drop in global growth, but either way, the US Dollar should continue to be a concern. Looking over the last year, and really, the history of crude given that it is priced in US Dollars, traders tend to see a negative correlation of the US Dollar and Crude Oil.

As of March 8, the correlation coefficient over 20 periods trailing was -.26 with an early January reading of -.72 showing an aggressive inverse correlation. The correlation in late December pushed positive for a few weeks, but as many know, that was a time when most risk assets were sold so there wasn’t much insight to be had from that anomaly.

If US Dollar strength continues, traders could see a constraint come into the picture on not only global trade but most assets (most notably commodities) that are priced in US Dollars like crude oil.

Follow the DailyFX Podcasts on A Platform That Suits You

Tyler Yell is a Chartered Market Technician. Tyler provides Technical analysis that is powered by fundamental factors on key markets as well as trading educational resources. Read more of Tyler’s Technical reports via his bio page.

Communicate with Tyler and have your shout below by posting in the comments area. Feel free to include your market views as well.