Oil has wavered around its four-month high over the last three weeks with further upside now looking unlikely in the current economic and political climate. Global economic growth fears continue with downgrades becoming commonplace, leaving central bankers unable to tighten monetary policy as had been expected last year. The lack of growth will continue to weigh on the price of crude oil, despite the OPEC+ production cuts, leaving it vulnerable to further trade war fears.

The US-China trade war continues but progress may be on the cards with US President Donald Trump tweeting Tuesday that talks with China are going ‘very well’, while US Trade Representative Lighthizer and Treasury Secretary Mnunchin are expected to travel to China next week to help push trade talks forward. A successful trade deal between the world’s two largest economies would help ease global growth fears and likely push the price of oil higher.

A look at the charts shows how Brent has stalled in recent days near the November high with a recent double-top just over $68.00/bbl. Resistance starts at the 200-day moving average around $68.85/bbl. followed by 38.2% Fibonacci retracement at $70.56/bbl. Reasonable support should be seen at the 50% Fibonacci retracement level at $65.60/bbl.

How to Trade Oil: Crude Oil Trading Strategies and Tips. 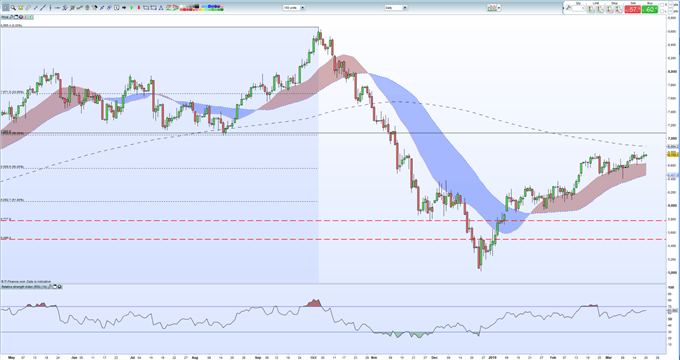