Crude oil retreated to around $63.40 on Monday after climbing to the highest price in five months last week – around $64.50. Crude oil’s outlook is clouded by a series of supply-side uncertainties alongside global growth concerns that could weigh on demand forecasts.

Oil-producers Libya and Venezuela remain in states of crisis which has called their output consistency into question. Perhaps a more immediate driver behind Monday’s price decline was a report from Reuters regarding comments from a Russian official on the state of Russia’s crude oil market share.

On Saturday, Russian Finance Minister Anton Siluanov commented on Russia’s receding share within the crude oil market. “There is a dilemma. What should we do with OPEC: should we lose the market, which is being occupied by the Americans, or quit the deal?” he said in Washington. If Russia were to cast aside OPEC output constraints in favor of recapturing lost market share, crude could see its recent rally threatened. The current 1.2 million barrel per day cut was enacted in January and is slated to remain in place for six months. OPEC and OPEC+ members will meet on June 25 and 26 to discuss an extension to the cuts. 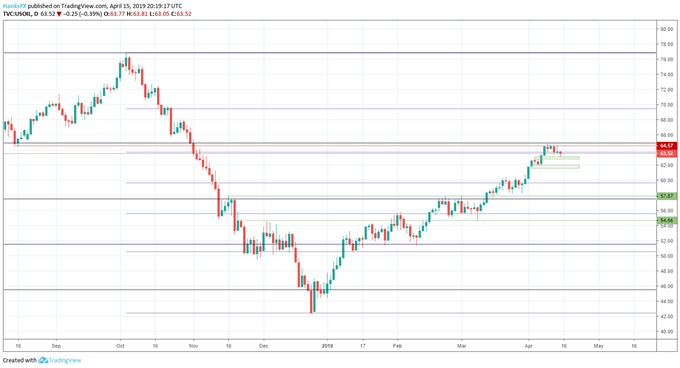 From a technical perspective, crude oil trades slightly beneath the 61.8% Fib level from October’s highs to December’s lows in 2018. Above that exists horizontal resistance from August’s swing low, with the 23.6% Fib level from February 2016 to October 2018 to the topside.

Intraday trading saw crude slip beneath the 61.8% level early on and was unable to breakthrough on multiple retests as the session progressed. For support, the $63.11 to $62.82 area will offer buoyancy should the commodity experience further pressure in the week ahead. Similarly, $62 to $61.60 will likely mark an area of subsequent support. 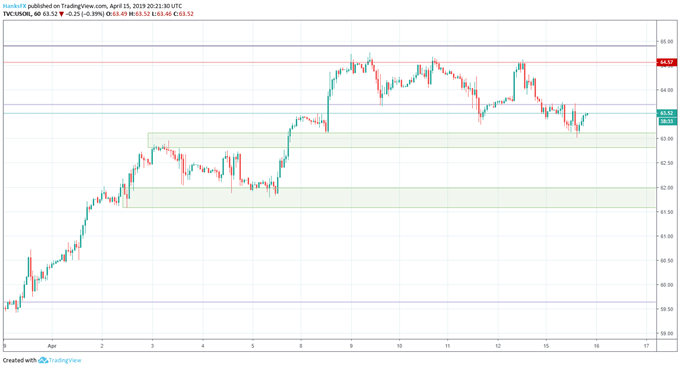 With the next OPEC meeting still months away, crude traders should look to Chinese GDP on Wednesday to help gauge the degree of demand for the fossil fuel. Baker Hughes rig count data is due Thursday, which will also offer short-term influence on crude oil’s price. View our economic calendar for both data releases and other economic indicators in the week ahead. Follow @PeterHanksFX on Twitter for further market insight and updates.